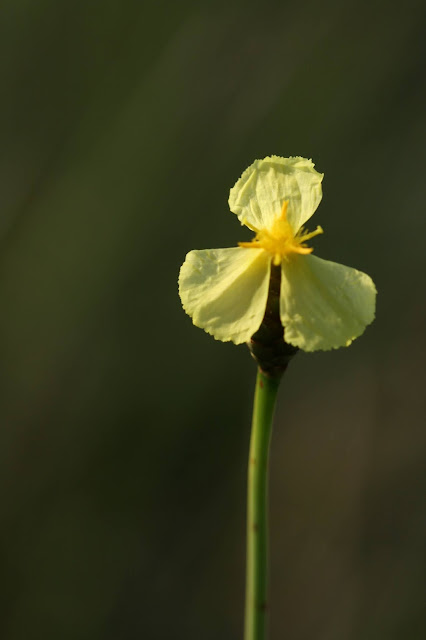 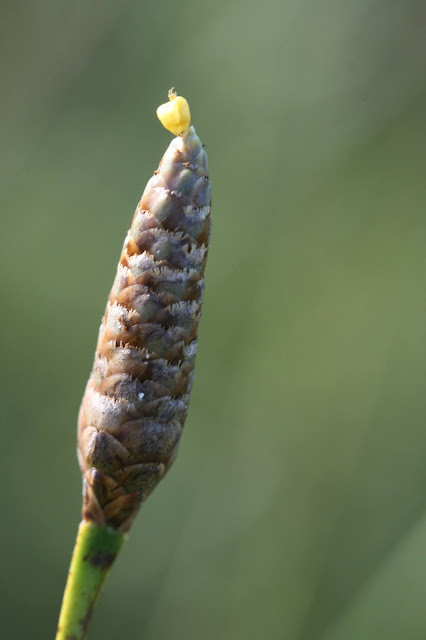 Coastalplain yellow-eyed grass (Xyris ambigua) is a very common resident of open wetlands throughout Florida. As its name suggests, it also is found throughout the Southeast Coastal Plain from east Texas to Virginia.  This is a perennial with a rather robust growth form. The basal leaves are up to 16 inches in length and about 3/4 inches wide at the base. They taper to a point - as is common to all in this genus.  The base of these leaves is "slimy" to the touch and marked by dark brown striations on a creamy white surface. I was remiss in taking a photograph of this feature - something I will rectify sometime in the future.
Flower stalks rise up to 3 feet above the basal leaves on straight stems. The flowers are produced individually on tapering cones composed of overlapping scales with noticeably fimbriate edges. As is typical for most species in this genus, the flowers are bright yellow and composed of 3 petals. Each bloom lasts just for a part of the day - opening in late morning and shriveling up by late afternoon. They are pollinated mostly by bees.
Coastalplain yellow-eyed grass is robust and showy enough to warrant commercial propagation, but I am unaware of any native plant nursery doing so at this time. It would make a striking addition to a rain garden setting or for a wetland restoration project. Perhaps this situation will change sometime in the future. Look for this robust species at the edge of moist to wet site throughout the state.
Posted by Hawthorn Hill at 8:06 AM