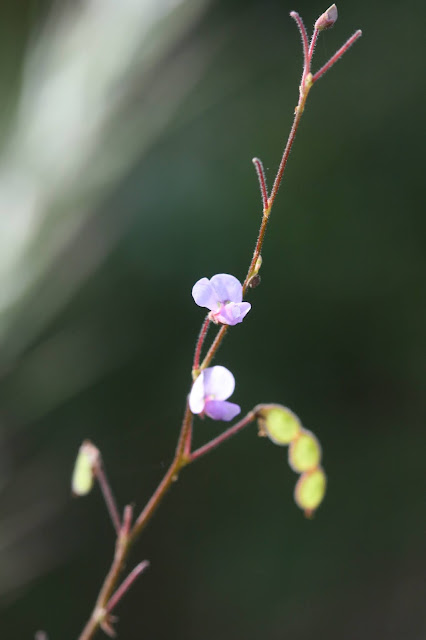 Sand ticktrefoil (Desmodium lineatum) is a diminutive perennial member of a genus comprised of plants most-often considered as nuisance weeds because their many-parted loments are sticky and adhere to pant legs and other clothing - as well as the hair of pets. The loments of this species are characterized by being in 3 parts. This is also sometimes called matted ticktrefoil as the foliage typically forms a mat on the ground. As its common name implies, this is a plant most common to well-drained sandy uplands. It is found in most Florida counties in the northern one-third of the state. It also is reported from most of the Southeast Coastal Plain from east Texas to Virginia and Maryland. It is a species that responds positively to fire and other habitat disturbances.
As other members of this legume-family genus, the leaves are three-parted leaflets, each being about 1/3 inch wide and decidedly rounded. From this mat of leaves emerges flower stalks in summer that may reach about 1 foot tall.The individual flowers are light lavender with a deeper purplish lower lobe. They are small - about 1/4 inch long. Flowering is most common in the summer months, though this photo was taken in early October in an area that had been rather recently burned.
Ticktrefoils are a nuisance due to their method of seed dispersal, but they are important host plants for various skipper butterflies - most notably the long-tailed skipper.  This and other members of this genus are easy to cultivate from ripe seed. They are not plants likely to be propagated by commercial nurserie, however, so you would have to grow your own.
Posted by Hawthorn Hill at 11:45 AM