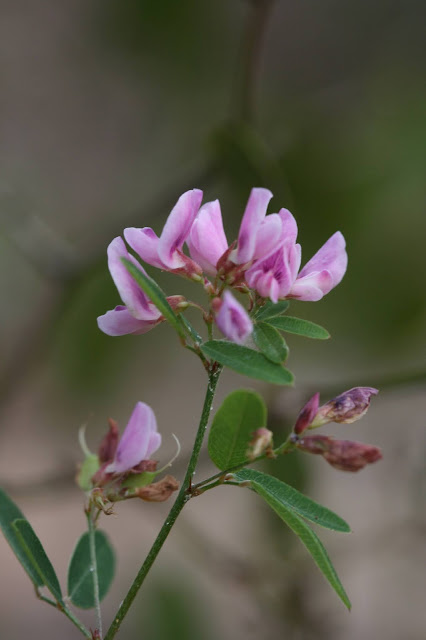 Tall bush clover (Lespedeza stuevei) is a perennial legume found in most counties in north Florida. It also has been reported from most states in the eastern half of the U.S.  Throughout its range, it is most commonly found in well-drained sunny habitats and seems to especially respond to disturbances.  Legumes like this serve to enrich soils by fixing nitrogen.

As its common name suggests, it is an erect forb that can reach a mature height of 3 feet or more. The three-parted (trifoliate) leaves alternate along the stems. They are sparsely hairy and numerous.  The plants are much taller than they are wide.

Flowering occurs in summer to early fall. Clusters of pale to rich-colored pink pea-shaped blooms occur at the tips of the stems. They are noticeably keeled (as are most legumes) and the inside of the petals are marked with deeper pink lines and blotches. Following blooming and in late fall, pollinated flowers give rise to a one-seeded rounded pod. The seeds, like in other bush clovers, are important food for bobwhite quail, ground doves and other ground-nesting birds. Although not reported, this species (like L. hirta) may serve as a host plant for gray hairstreaks and southern cloudywings.

Although important wildlife plants, none of the bush clovers are routinely propagated by nurseries affiliated with FANN - the Florida Association of Native Nurseries.  They deserve more attention. With its richly colored flowers and its ability to improve soils, this species especially seems to warrant being propagated. I do not know how adaptable it would be, however, south of its geographical range.