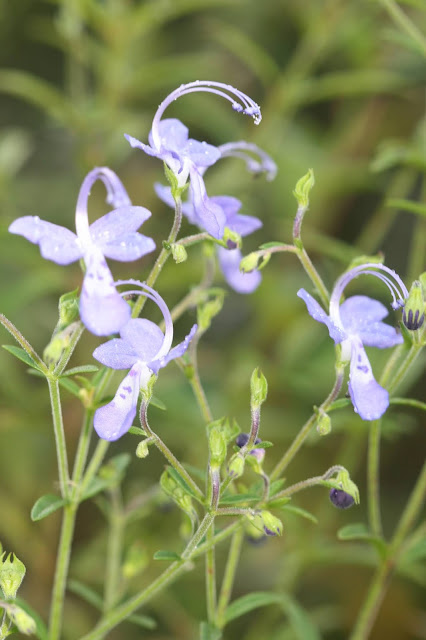 Narrow-leaved blue curls (Trichostema setaceum) is an annual wildflower found throughout much of the northern half of Florida in sandy, xeric habitats such as sandhills and open oak woodlands. It also occurs in much of the eastern half of North America. It is often confused with the more ubiquitous common blue curls (D. dichotomum) though the latter does not often occur in such xeric conditions. As its name implises, narrow-leaved blue curls is also distinguished by its relatively narrower foliage.

As an annual, this species grows quickly in the spring to reach a maximum height of about 2 - 2 1/2 feet. The stems are weakly hairy with many branches that branch off opposite of each other.  The leaves are either entire or have small teeth along the margins. They are without petioles or with very short ones. Each is about 1/2 inch long and about 1/4 inch wide. They are highly fragrant if crushed - as its close relative.

Flowering occurs in late summer and fall. They are similar in color and form to its more-common relative. The lower blue to almost-violet lower lip is extended from the corolla with a white splotch dotted with purple spots.The four long, curved stamens  arch above the petals and give this species its common name.  Numerous seeds are produced in the ripe capsules and these serve to disperse the plants abundantly for next season. The flowers are primarily pollinated by bees.

Blue curls in general are favorite wildflower additions to landscapes in Florida, but this species has been virtually ignored. It shouldn't be. It is easily grown from ripe seed. Just be aware that it will need open ground in the planting bed for it to be able to reseed effectively. Given those conditions, it may also reseed aggressively and need thinning - especially if added to a mixed wildflower planting.