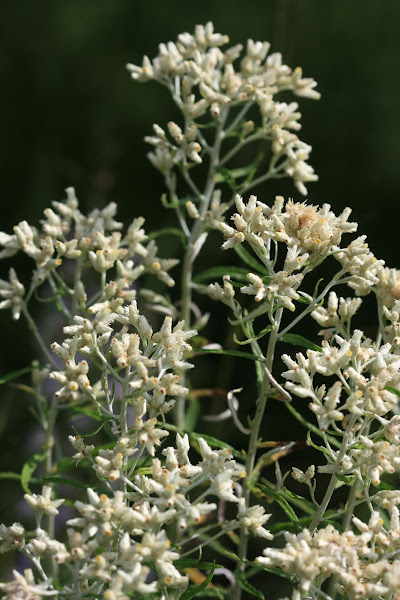 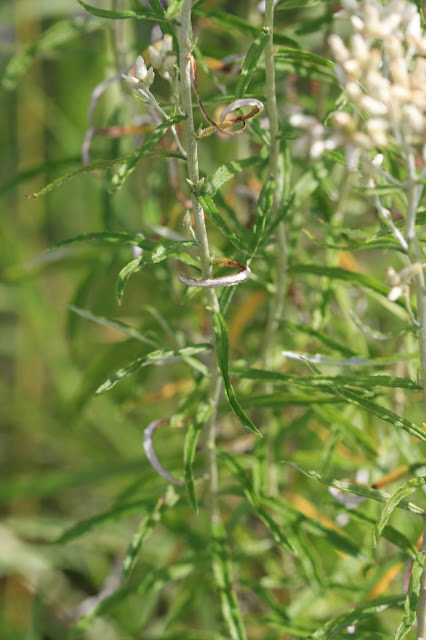 Sweet everlasting (Pseudognapthalium obtissifolium) is a widespread wildflower found statewide throughout Florida in a variety of upland habitats and across most of eastern North America. It was once placed in the genus Gnapthalium, but was moved several years ago. It also has been called cudweed and rabbit tobacco as common names though these are also applied to other relatives of this annual wildflower.
This becomes a rather tall plant, reaching several feet in height before its late-summer blooming period. Like other members of this genus, its leaves are densely tomentose on the undersides. The leaves are linear in shape, alternate along the stem and about 3-4 inches long - becoming shorter up the stems.  The stems are silvery tomentose as well.
Flowering occurs typically from August through October in Florida. The buds form atop the many upper stems. They are white and barrel shaped. Each bloom is small - rarely longer than 1/4 inch. The profusion of blooms at the height of blooming makes it rather attractive. The blooming season lasts several weeks before the flowers start to decline. They seem of most interest to bees.
This is another plant not typically propagated by native nurseries; often considered somewhat weedy. It is the host plant, however, for the American lady butterfly and it is grazed by a number of herbivores. As such, it has value in a mixed wildflower meadow. Propagation is best done with seeds, but as an annual it needs bare soils to reseed in order to maintain it over time. This is a forgiving plant that thrives in most soils except those that stay routinely wet.
Posted by Hawthorn Hill at 8:56 AM