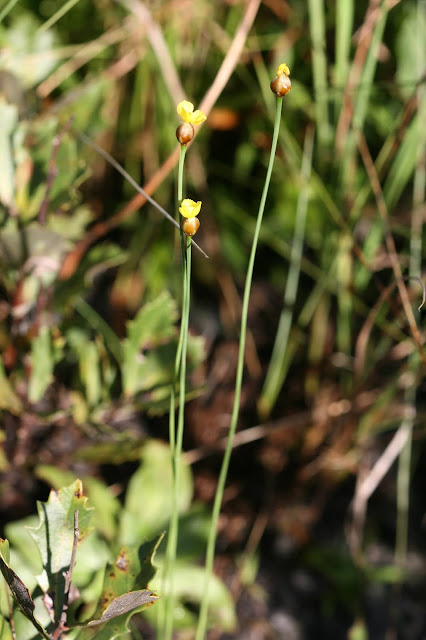 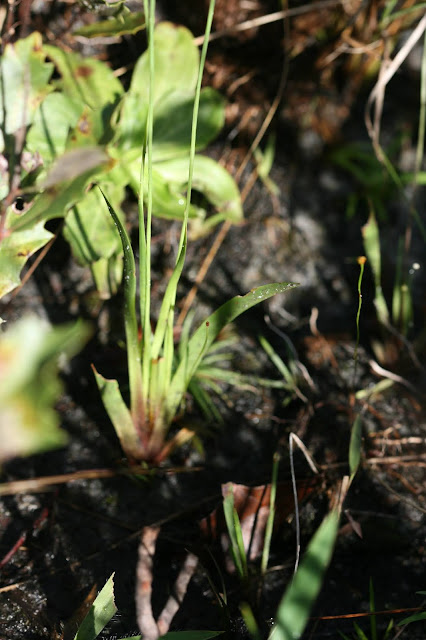 There are 24 species of native yellow-eyed grasses in Florida and they can be difficult for most to accurately identify. Florida yellow-eyed grass (Xyris floridana) is one that is rather distinctive. It is a diminutive perennial found throughout much of Florida in wetland conditions. This is a species confined to the Southeastern Coastal Plain; occurring in open wetlands from Louisiana to North Carolina.

This plant can be distinguished from its closest relative (X. serotina) by the growth form and the coloration of the base of the leaves. Florida yellow-eyed grass normally occurs as individual plants, not dense tufts, and the base of the leaves is typically dark maroon to purple. This can be seen in the lower photograph above.Unlike many in this genus, the "cones" of flowers are small and rounded - not elliptical. These are obvious in the first photograph.

Flowering occurs on stalks that reach only about 12 inches in height. Flowers are bright yellow as is common to most species and they are produced singly in summer to fall. Pollination is most likely the result of small bees.

Yellow-eyed grasses in general are not grown commercially by nurseries affiliated with FANN - the Florida Association of Native Nurseries.  This is regrettable as they would make interesting additions to wetland plantings and restoration projects. As Florida yellow-eyed grass is so small and largely inconspicuous, it is even less likely to be offered in the future. For the die hard hobbyists, collect the tiny seed once the cones are brown and ripe ad scatter the seed on wet potting soil for best germination. Otherwise, just be content to find this species in moist to wet soils in open sunny locations.

Posted by Hawthorn Hill at 7:40 AM