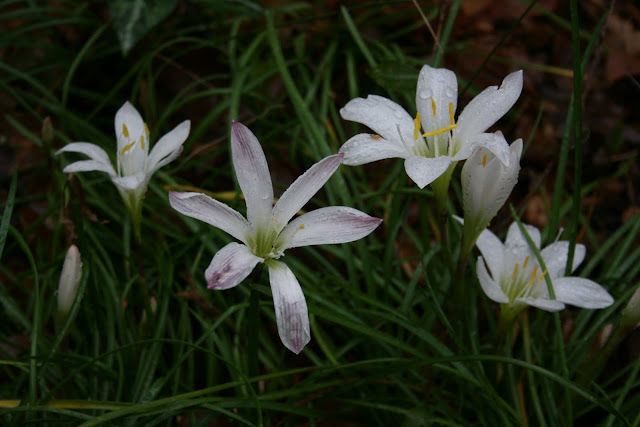 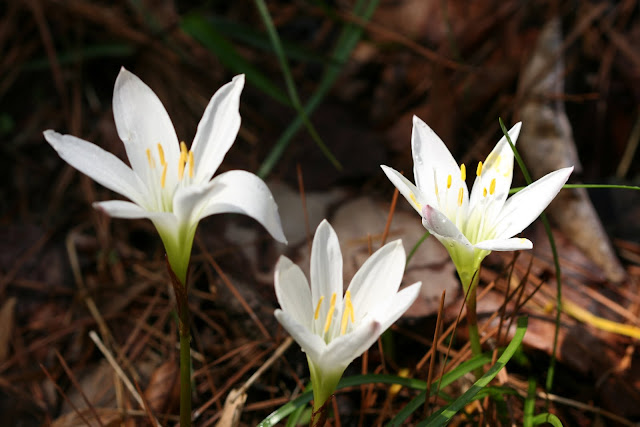 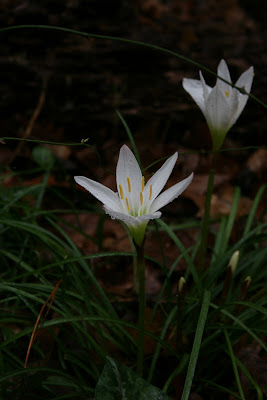 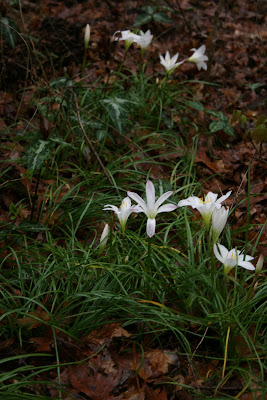 Florida is home to two distinct varieties of Atamasco rain-lily (Zephyranthes atamasca).  While some taxonomists separate the two into different species, I will side this time with the "lumpers" - and hope I am wrong because I am a "splitter" at heart.  Basic Atamasco rain-lily (Z. atamasca var. atamasca) has leaves that are at least twice as wide as those of Treat's rain-lily (Z. atamasca var. treatiae), but otherwise they are identical.  Atamasca rain-lily occurs throughout the northern two-thirds of Florida and in much of the Southeastern Coastal Plain.  In Florida, it is considered a state threatened species.
All of our native rain-lilies require open habitats and reasonable moisture to prosper so they are most common to open flatwoods, mowed roadsides (and similar types of such habitats), and pastures.  In these areas, it often goes unnoticed when not in bloom as it consists of linear grass-like leaves that often blend into the surrounding vegetation.  But, when in bloom it becomes spectacular - especially if growing in mass.
Atamasco rain-lily is a perennial evergreen (at least in central Florida) member of the lily family.  As such, it originates from a bulb, and this bulb produces bulblets off its outer edge over time which form new plants.  Eventually, Atamasco rain-lily forms colonies around each plant consisting of many individuals.  These are easy to subdivide and transplant to new areas or they can be left alone as a mass planting.
Basic Atamasco rain-lily has leaves that are about 1/4 inch wide while those of Treat's rain-lily rarely exceed 1/8 inches.  Both can be as long as 18 inches and the plants form nice mounds of leaves when not in bloom.
It's the blooms which make this species a favorite wildflower, however.  Though individual flowers only last a couple of days, they are 3-4 inches long and either pure glistening white or with a flush of pink - as in the photo above.  They are held 6-18 inches above the leaf mass.
As its common name implies, flowering occurs only after a spring or early summer rain shower.  The day after a measureable rain, a rose-pink bud becomes visible within the basal leaves and by the second (or third) day, the flowers are open.  Although flowering may occur sporadically at other times, nearly all blooming takes place during late spring or summer and only lasts for about a month.  Flowers are sometimes produced in succession, but individual plants will flower after each rain event during this time period. Once the plants have gone through this cycle of flowering, additional rains later in the season rarely trigger more.
Rain-lilies produce large numbers of seed and also propagate themselves this way.  I have found them easy to grow from seed and it allows me to produce more plants without the trauma of digging them out of the ground to remove the side bulbs.  Pollination mostly comes from bees.
Treat's rain-lily is very similar in appearance to Simpson's rain-lily, described below.  The best way to keep the two species separate is by looking at the length of the female part of the flower (the style) compared to where the pollen-producing parts are (the anthers).  In both forms of Atamasco rain-lily, the female portion of the flower is nearly twice as long and sticks well out beyond the anthers.  In Simpson's rain-lily, they are the same length.
As should be expected, Atamasco rain-lilies are commonly propagated by commercial sources and are widely available to the home gardener.  Just be careful that you are getting a native rain-lily, however, instead of one of the many non-natives that are also widely sold.  Rain-lilies are extremely hardy and durable.  They can withstand long periods of drought as well as great amounts of moisture.  They also have a wide tolerance for amounts of sunlight.  Just don't try to use them in deep excessively well-drained sands or in deep shade.  I like rain lilies in mass, but they also do well in mixed plantings or planted in lawns.  They can be mowed regularly with no real damage as long as they are not cropped right to ground level. Just don't mow them for several days after a rain or you will miss the reason you added them.
Posted by Hawthorn Hill at 8:23 AM