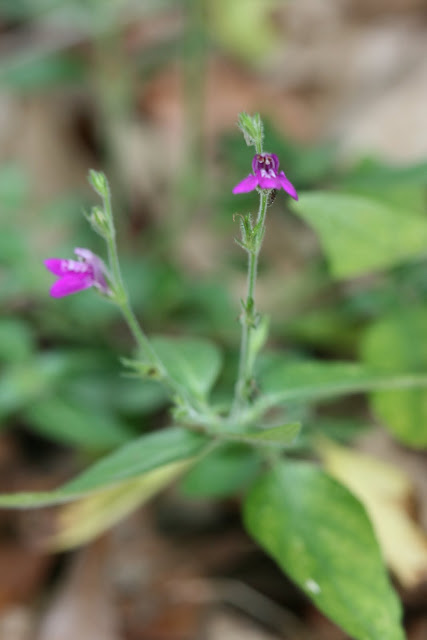 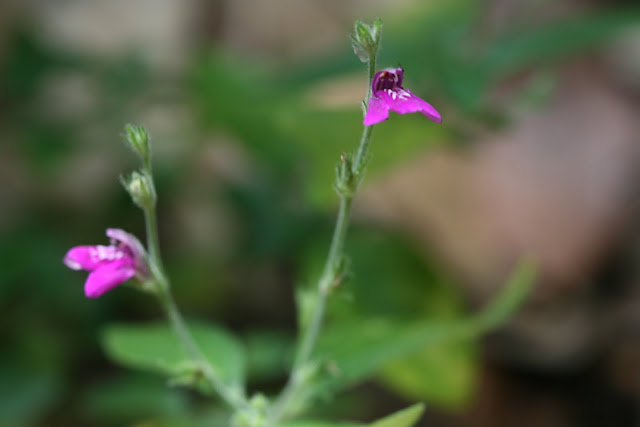 Cooley's justicia (Justicia cooleyi) is a very rare plant, endemic to a three-county area in north-central Florida; Hernando, Sumter, and Lake Counties.  It is listed as endangered by both the state and federal government and mostly confined to calcareous hammock soils; locations where it receives filtered sun and/or partial sun in gaps of the forest canopy.

Cooley's justicia is a low-growing perennial herb which rarely stands taller than 12 inches, but grows outward to 18-24 inches in diameter.  Its thin, papery leaves are about 2 inches long, somewhat oval shaped, opposite on the stem and covered by small "hairs".  Individual plants have multiple branches and this gives them a rather dense aspect from a foliage perspective.

The flowers occur over a protracted blooming season which begins in early summer and continues into early winter - depending on the arrival of first frost.  Individual flowers are quite small (about 1/2 inch long), but a deep and striking lavender purple in color with white striations on the lower lip.  These flowers are bee pollinated.

Cooley's justicia is exceedingly rare in nature, but quite easy to grow and propagate in the home landscape - if given the proper conditions.  We have maintained it in our backyard hammock understory for many years at Hawthorn Hill, Pinellas County and it has reseeded itself into many new locations within this setting.  In fact, our original plants came up as volunteers in potted wildflowers purchased from a native nursery that was also propagating Cooley's justicia.  Tiny seed capsules are produced at the tips of all the branches after flowering and the seeds are widely scattered as the capsules open.

Cooley's justicia makes a very interesting addition to the understory of a shady hammock setting.  Because it prefers limey soils, it does well near the foundation of houses or near walkways, but it does not require it.  Make sure it gets filtered light or sun for short periods of the day.  It does not prefer dense shade and will not perform well in these conditions.  Because it is small, plant it near the front of the beds or along pathways so it can be admired.

This diminutive wildflower is sometimes offered by native nurseries affiliated with the Association of Florida Native Nurseries (AFNN), but has never been "popular".  Although we often have additional specimens for sale at Hawthorn Hill, we do not list it in our plant list.  Please inquire if you are interested.

Posted by Hawthorn Hill at 2:20 PM