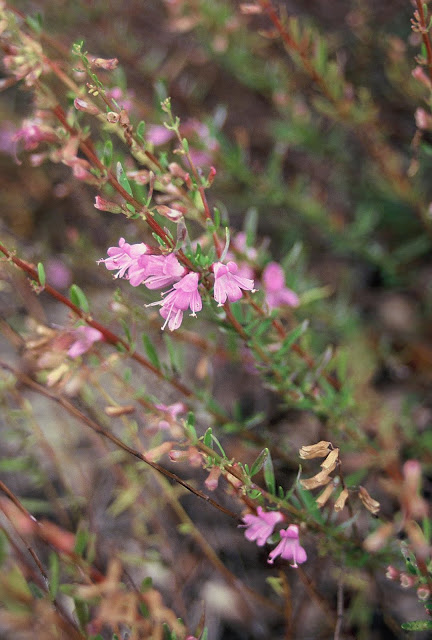 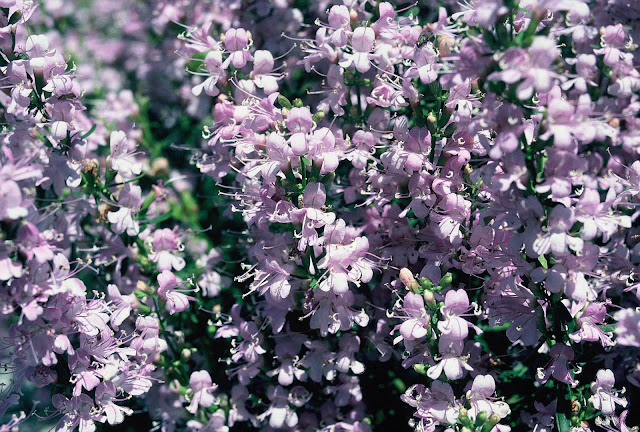 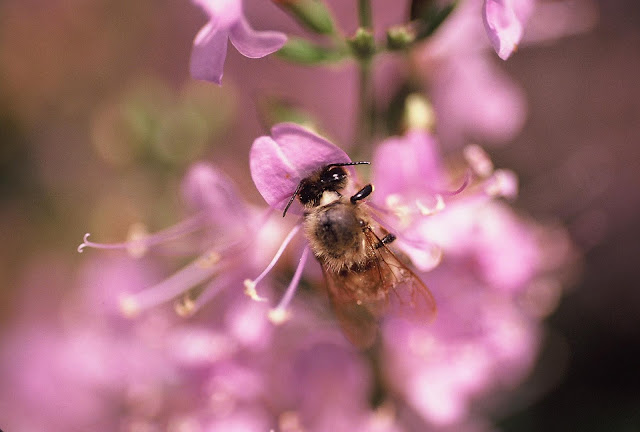 Lakela's balm (Dicerandra immaculata) is one of six perennials in this genus; all extremely rare and confined to tiny ranges in different parts of Florida - all in yellow sand scrub.  Lakela's mint is located in a small region of this habitat type that straddles Indian River and St. Lucie Counties near the coast.  It is listed as an endangered species by both the state and federal governments.

Although considered perennials, all six of the woody Dicerandra's (there are two herbaceous annuals as well) are actually very short-lived plants.  In scrubs where I have monitored individual plants, very few live more than 3 years.  Seedlings grow quickly, they produce some flowers during the second fall, and they bloom profusely during the third, set seed and die. All members of this genus rely on this strategy of producing very large numbers of seed.

Like all of the woody species, Lakela's mint is rather short of stature and larger in circumference.  Mature specimens rarely stand taller than 12 inches, but may reach 18 inches in diameter.  The foliage is very linear and bright green, and it emits a very pleasant minty aroma when bruised - or even brushed against.

Its the flowers which make this species so spectacular.  As the Latin name suggests, the petals are not spotted ("immaculate") but a pure light pink in color.  Mature plants in full bloom are absolutely covered by the 1/2-inch flowers.  Blooming occurs mostly in late summer to early fall and may last for nearly a month.  The flowers are designed to be pollinated by small to medium-sized bees and sometimes a lack of pollinators limits their survival in developed landscapes.

Despite their rarity, most of the Dicerandra's have been offered for sale sporadically by native plant nurseries affiliated with AFNN, the Association of Florida Native Nurseries.  They are rather easy to grow if provided the types of conditions they occur in naturally - coarse-grained and deep sands, and full sun.  If you can provide these conditions and you can find specimens for sale that have been propagated legally, they make beautiful additions to a scrub garden.  Do not plant more than one species, however, as they will hybridize, and be prepared to either keep your plants going by taking cuttings each year or by hoping for seed set and eventual germination.  If you are counting on the latter, do not mulch your sand and make sure you have plenty of open sand for the seed to fall into.  I have successfully kept these species in white sand scrub as well as in yellow sand.  The mystery as to why they naturally occur only in yellow sands remains to be solved.

Posted by Hawthorn Hill at 5:51 AM