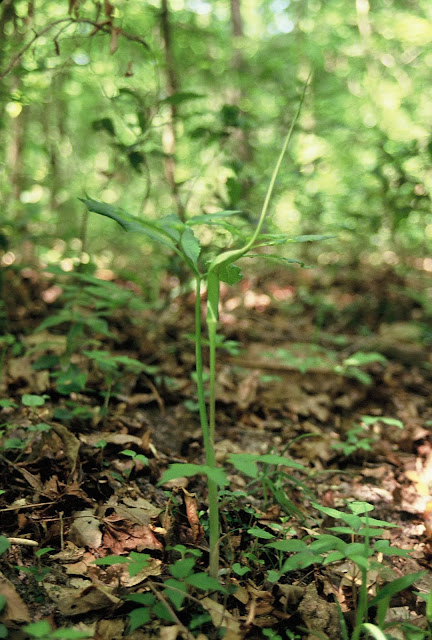 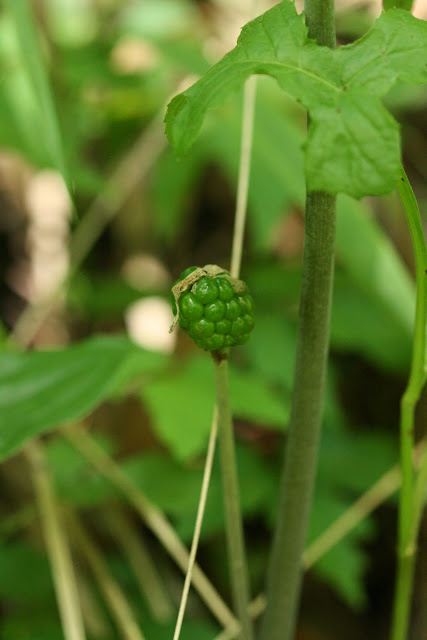 The green dragon (Arisaema dracontium) is the "other" widespread jack-in-the-pulpit.  It is found in much the same habitat types as its close relative, A. triphyllum, but seems a bit more numerous in moist woodland understories and a lot less likely in wet ones.  Green dragon is found throughout the northern two-thirds of Florida and in much of eastern North America - from Texas west and to Quebec to the northeast.
Green dragon differs from jack-in-the-pulpit in both the structure of its foliage and flowers.  The leaves emerge in early spring and quickly rise to a height of about 3 feet.  This single leaf blade is divided into a large number of leaflets; anywhere from 7 to 15 and they often stand well above the emerging flower stalk.
Flowering occurs at much the same time of year as jack-in-the-pulpit; March and April.  The flowering structure itself is tall and skinny.  Unlike jack-in-the-pulpit, the leafy spathe nearly encloses the fleshy spadix which has the tiny flowers and it tapers well above the spadix and ends in a long tapered point. The pollinated flowers become red fleshy berries in late summer.
Green dragon is not currently offered for sale by any of the nurseries affiliated with the Association of Florida Native Nurseries (AFNN), but is sometimes available from out-of-state sources.  We have had some success in our Pinellas County landscape with specimens originating in neighboring states as long as they have not originated from the Appalachians.  But, though our plants emerge and flower each spring, we have not yet had them produce fruit from which to propagate more.
Use green dragon in the understory of a mesic to moist hammock with reasonably fertile soils.  The underground bulbs should be planted just below the soil surface and they may require additional watering to get them well established.  Use them in the front half of the planting bed so they can be admired and mulch the soil with leaf litter (but not too heavily so as to impact water reaching the soil).
Posted by Hawthorn Hill at 6:17 AM