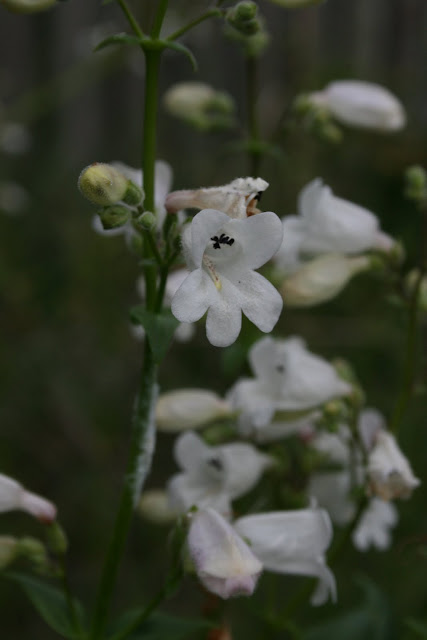 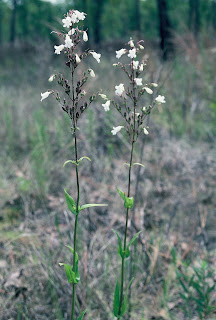 White beardtongue (Penstemon multiflorus) is a common wildflower in Florida and found nearly statewide in well-drained upland habitats.  Despite its widespread distribution in Florida, however, it occurs elsewhere only in Georgia and Alabama.  Penstemons are in the snapdragon family and they share many of the features we are familiar with in this commonly grown annual bedding plant.  The "beardtongue" part of the common name comes from the "hairy tongue" which lies along the lower portion of the fused petals.  This is the only white-flowered beardtongue native to Florida.

White beardtongue is the largest and most robust member of this genus here.  Like all penstemons, it is deciduous and loses all or most of its basal leaves by early winter.  Shortly thereafter, it produces yet another set.  These are large and elliptical, grayish green with a red mid-vein, and 4-6 inches long.  From this thick set of basal leaves, the flower stalk emerges in late spring.  Plants may reach 4 feet tall by flowering.

White beardtongue produces large numbers of white flowers - with a slight rosy overcast at times.  Each bloom may be about an inch long and many are open at any one time.  Flowering occurs in late spring to early summer, and though the flowers are not a spectacular color, a mass of this plant produces quite a show. The flowers attract mostly bees and other such pollinators, but hummingbirds will use them if they visit your garden at this time of year; the northern half of Florida.

White beardtongue is very drought tolerant, but I have found it to be rather picky about its growing conditions.  It will quickly be lost if grown in sites that stay too dry and it will definitely perish if kept too wet.  In the happy medium between, it makes a stunning addition to a mixed wildflower planting - especially if grown in masses.  Use it in clusters of 5 or more and place it near the back half of the planting bed.  White beardtongue will spread slowly by reseeding itself if it is in good growing conditions and the seed can find bare soil nearby.  It also slowly spreads outward by producing "pups" off the main basal rosette.

Of the three native beardtongues in Florida, this species is generally the most widely propagated.  We have grown it for years in our Pinellas County landscape, but do not propagate for sale at Hawthorn Hill. 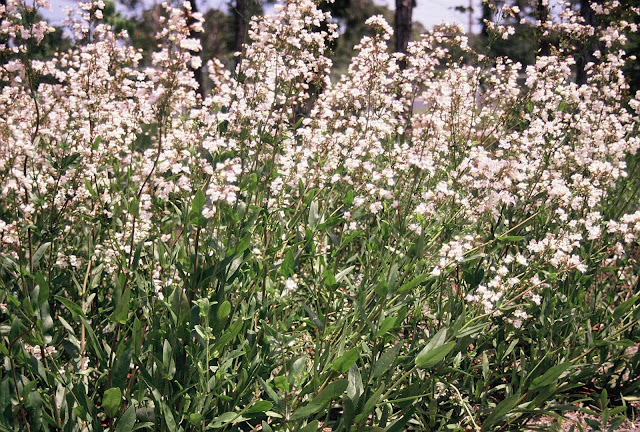 Posted by Hawthorn Hill at 5:16 AM