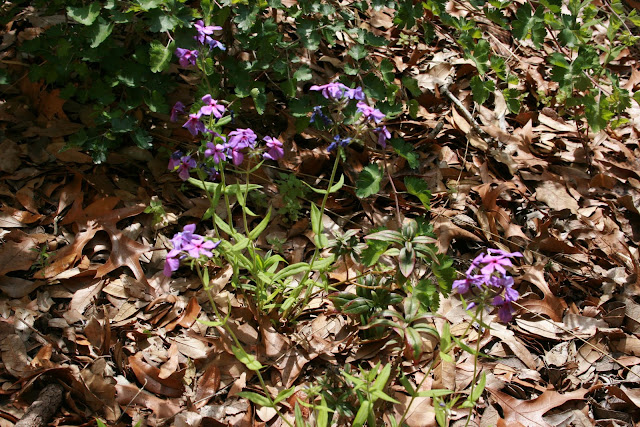 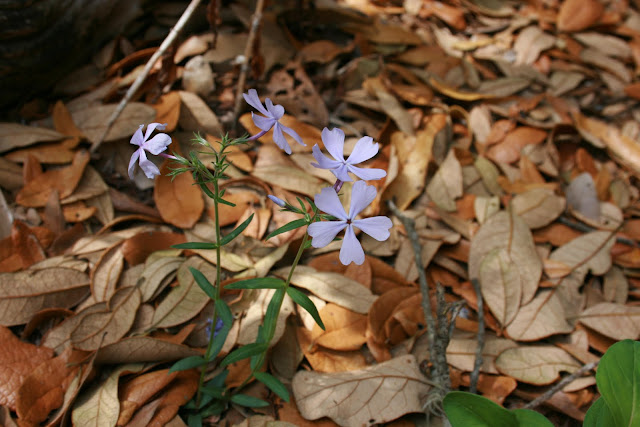 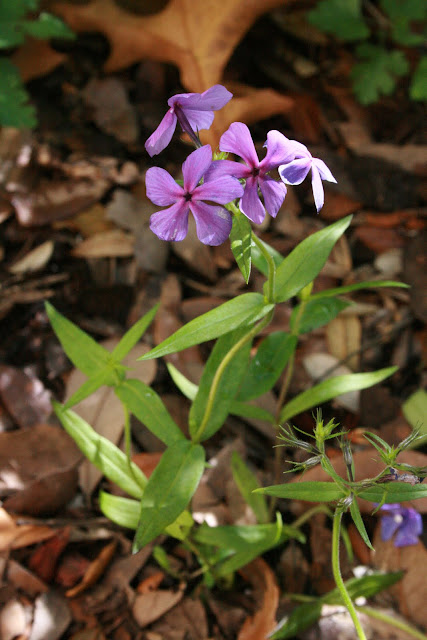 Phlox (Phlox spp.) have been a favorite wildflower of the home gardener for centuries and a large number of species are widely cultivated.  This has not been the case for much of Florida's native species and only woodland phlox (P. divaricata) has been made available by the nursery trade.  Woodland phlox is naturally rare in Florida and confined to a four-county area west of Tallahassee near the Georgia border.  It is extremely widespread in North America, though and rather common to most of the eastern two-thirds from New Mexico in the west to Quebec in the northeast.

In Florida, woodland phlox is confined to the understories of woodlands and in the edges of fields where it is somewhat protected from the harshness of full sun and excessive drought.  It prospers in filtered sun and in places where it receives half sun.

Woodland phlox is a deciduous perennial which makes its appearance in early spring.  Established specimens stand 12-24 inches tall. Their linear pointed leaves are 1-2 inches long and opposite each other on the stems.  Over time, plants produce many stems from their underground growing point, but each stem is a bit lanky and may bend over a bit - especially under the weight of a fully opened flower head.

Flowering occurs in late spring or very early summer and is relatively short lived. The numerous large 5-parted flowers, however, are wonderful.  Flower color is quite variable and can range from white to deep pink.  All phlox are attractive to pollinating insects and especially to butterflies.

The pollinated flowers produce seed capsules which ripen about a month after flowering.  The ripe capsules turn a golden yellow and then burst open; tossing the seeds a good distance away from the parent plant.  If you are in the garden when this happens, the sound of the capsule popping open is actually audible.

Despite its natural rarity in Florida, woodland phlox is commonly propagated and offered to the home gardener.  Just make sure to use plants propagated from Florida or near-Florida stock. We have grown it quite successfully in our home landscape in Pinellas County for a number of years now so it is more adaptable geographically than might be expected.  It is especially intolerant, however, to improper growing conditions.  We have ours planted near the foundation of our home in woodland soil and in an area where it receives only about 2-3 hours of direct sunlight.  It has died in sunnier locations and in areas where the soils were droughtier, but it also will not prosper if planted in deep shade. Given the right microclimate, this is a wildflower well worth adding to the home landscape.  Use it in mass and mix it with other wildflowers, such as violet (Viola spp.) and green dragon (Arisaema dracontium) and with some of the smaller stature ferns such as Christmas fern (Polystichum acrostichoides) and southern lady fern (Athyrium felix-femina).