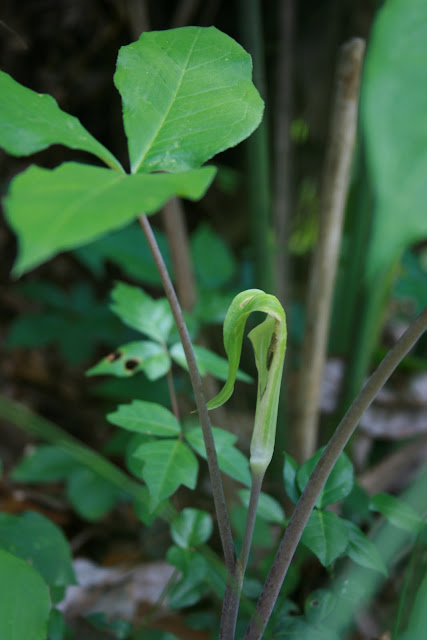 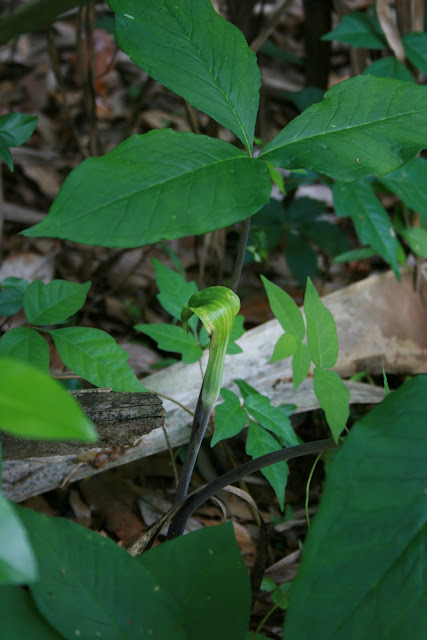 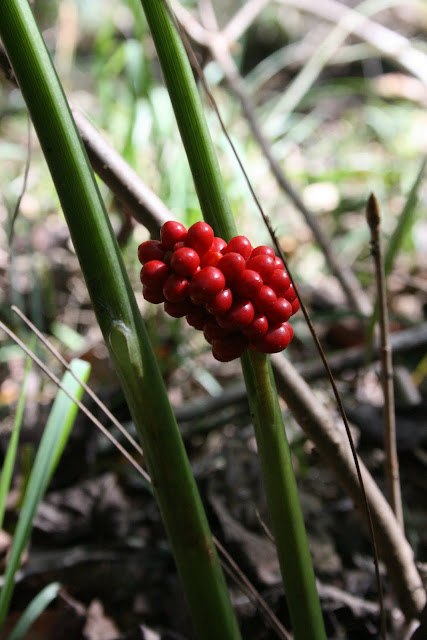 Jack-in-the-pulpit (Arisaema triphyllum) is one of those wildflowers recognized by nearly everyone.  It occurs nearly throughout Florida, from the panhandle south into Collier County, and throughout nearly all of the eastern two-thirds of North America.  Its folklore and use in children's literature have given it almost universal appeal.  Despite that, it is not currently offered by any of the nurseries affiliated with the Association of Florida Native Nurseries (AFNN) and, as far as I know, has never been offered in the past.
Jack-in-the-pulpit is resident to the understories of moist shady forests.  It disappears quickly from soils that stay too dry and it does not prosper if the soils are too infertile.  In Florida, I have found it most commonly in locations that infrequently flood for short periods or in forests immediately adjacent to swamps.  In these conditions, it can become very numerous; sometimes almost carpeting sections of the forest floor.
This is a spring-blooming perennial and it often disappears by late summer after the fruit ripens - or earlier if no fruit is produced.  As its Latin name implies, it emerges in the spring with large leaves that are 3-parted.  Individual plants have few leaves, but they may stand more than 12 inches tall and 8 inches across.
The flower stalk arises in late spring and flowering occurs quickly.  Jack-in-the-pulpits are aroids and their flowers are fairly typical of this family.  The individual flowers are quite small and greenish white, and they occur on the white "tongue" (correctly called a spadix) inside the green leafy hood (the spathe).  The flowers themselves are short-lived, but the overall structure lasts for months.  Flowers that are pollinated, eventually ripen into bright red berries which are eaten by birds and small rodents which carry them about the forest floor.
We have grown jack-in-the-pulpit for several years in our shady forest hammock at Hawthorn Hill; originally propagated from seed collected in Florida.  They have persisted over several seasons, but have not prospered as well as hoped because of the lack of normal rainfall we have experienced these past couple of years.  Jack-in-the-pulpit forms bulbs below ground and these enable them to survive a wide range of conditions once they are established, but good flowering and foliage production only occurs with moist soil conditions.  We hope to eventually get the kinks worked out in our population and make this species more widely available.  Do not use plants which originate from other states - especially those from Appalachian sources.  They just won't last in Florida, unless you live around Torreya State Park.

Posted by Hawthorn Hill at 2:58 PM