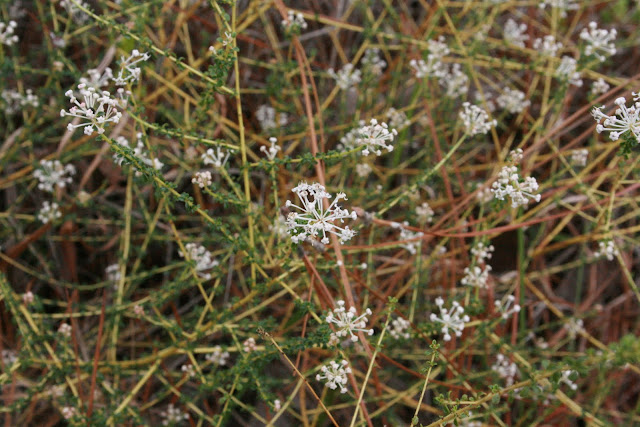 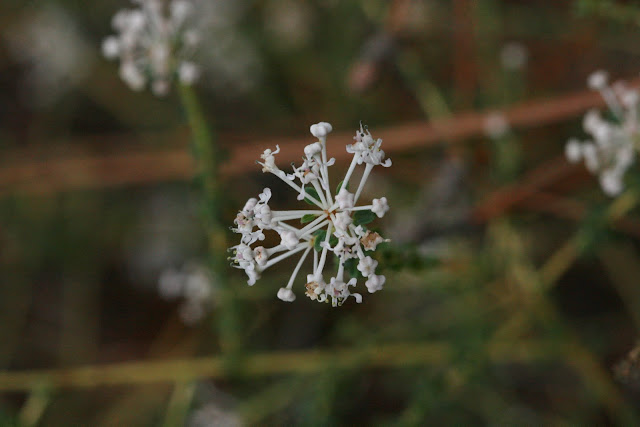 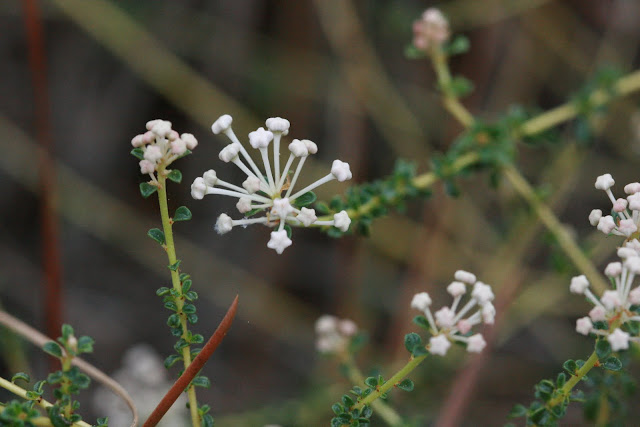 Its Latin name is pretty obvious.  The "little leaves" are, in fact, greatly reduced in this species to tiny rounded nubs; most numerous near the ends of the yellowish wiry stems.  They are deep green and rather thickened as well.  A great many stems arise from the ground and they venture off in all directions, making individual plants difficult to discern from their neighbors and appear as a tangled mass.  Littleleaf New Jersey tea grows as a low groundcover.  Plants rarely stand taller than 1 foot, but extend 2-3 feet outward or more from the center.

Its somewhat unusual growth form is greatly compensated by its flowers.  Flowering occurs in summer and the flower heads are produced at the tips of all the many individual stems.  When in full bloom, this plant makes quite an attractive show with its bright white flowers carpeting the ground.  Flowering occurs over several weeks.

Although butterfly gardeners throughout North America are familiar with this genus for its ability to attract nectaring species, I have not observed a great many butterflies using littleleaf New Jersey tea.  Perhaps its small flowers and their position close to the ground limits its use somewhat to mostly small butterflies such as hairstreaks and skippers.  No butterflies in Florida are known to use it as a larval food source, though the common gray hairstreak is known to use its close relative here and the rare mottled duskywing uses New Jersey tea exclusively.

I have propagated littleleaf New Jersey tea from cuttings, but it has always been more "miss" than "hit" for me using this method and the process is difficult enough to have discouraged most growers.  Growing this species from seed requires that the seeds be first treated by heat.  One method is to pour boiling water on the ripe seed and let it soak for approximately 12 seconds. Cool them off at this point by placing ice in the hot water.

We do not currently have littleleaf New Jersey tea in our landscape at Hawthorn Hill, but we are always looking for seed and a way for us to add it.  This is an interesting species to add to the understory of an expansive sandhill/dry prairie landscape, mixed with native grasses and other taller wildflowers.  Use it near pathways or the front of the planting area or it will get lost amongst the other species.