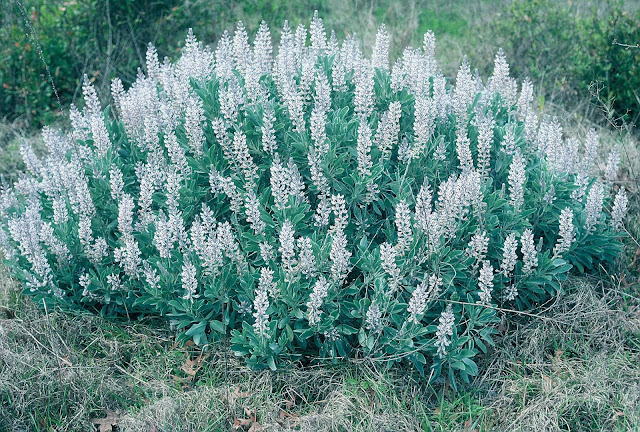 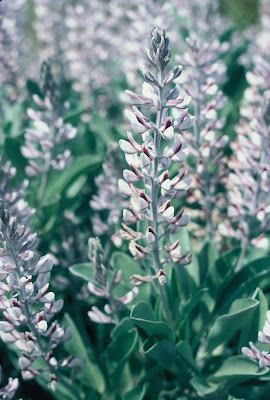 Scrub lupine (Lupinus aridorum) has been somewhat of a puzzle for plant taxonomists attempting to define it.  At times, and to some, it is a unique species with the Latin name I am using.  At other times and to other taxonomists, it is a unique variety of another rare lupine (Lupinus westianus) that is found only in coastal beach dune scrub in the western panhandle.  I am not a taxonomist so I am not qualified to weigh in on the debate from that point of view. I choose to keep the two separate, because they look to be distinct visually and because their populations are so widely separated from each other geographically and by plant community type.
Scrub lupine is found only in a tiny geographic area of scrubby sandhill within a three-county area around Polk, Osceola and Orange Counties.  Within this region, it seems to occur mostly in somewhat disturbed and always open areas of deep sand; not within the Lake Wales Ridge itself and rarely in association with other Ridge endemics.  It is a beautiful, but rather "strange" plant.
Like nearly all of Florida's native lupines, scrub lupine is a very short-lived "perennial" that survives by producing copious seed that can remain viable for many years; waiting for disturbance of some type to provide the conditions it needs to release it.  Lupines seem to spend the first year as small non-flowering seedlings and the second as mature plants which flower sparingly.  During the third year, however, well-grown plants assume a massive width, flower spectacularly, and die after seed dispersal.  The photo at the top of this post shows a mature plant in full flower.  Its height of the foliage is about 12-18 inches, but the diameter nearly 4 feet.  This same plant was dead the next year when I returned to check up on it once more.
Scrub lupine blooms in the spring.  The flower stalks reach about 3 feet in height and many are produced per plant.  The flowers are a soft pink in color with a distinct rosy "eyespot".  The color of the blooms is never as deeply pink as evident in the much more common lady lupine (L. villosus).  All of our other native lupines are blue.
Lupines are bee pollinated.  Though the gray hairstreak butterfly is known to sometimes use its common cousin, sky-blue lupine (L. diffusus), as a larval plant, lupines are mostly fed on by moth caterpillars and they can sometimes cause extensive leaf damage.
All native lupines, with perhaps the exception for sundial lupine (L. perennis) which occurs only in extreme north Florida, are extremely difficult to grow.  In nature, they are extremely finicky about where they will prosper and they require the services of a specific mycorrhizal fungi and cyanobacteria for their roots to fully develop.  I have found seeds of all lupines easy to sprout, but extremely difficult to grow into healthy seedlings.  The seedlings vehemently detest pot culture, but are very hard to get established into plants.  Over the years, I have grown most species, including scrub lupine, in my home scrub garden and had them bloom.  I just have never had them persist and my attempts to reintroduce them have been more "miss" than "hit".  I once germinated large numbers of scrub lupine seed that was over ten years old; given me by a biologist who had once worked with the species.  We can only hope that this peristence allows it to survive the onslaught it faces from runaway development in the Orlando area.  Few pockets of this species are currently protected and its long-term future seems precarious.
Posted by Hawthorn Hill at 8:02 AM