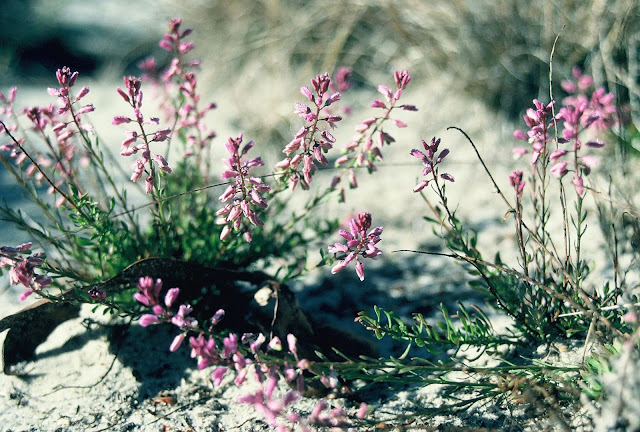 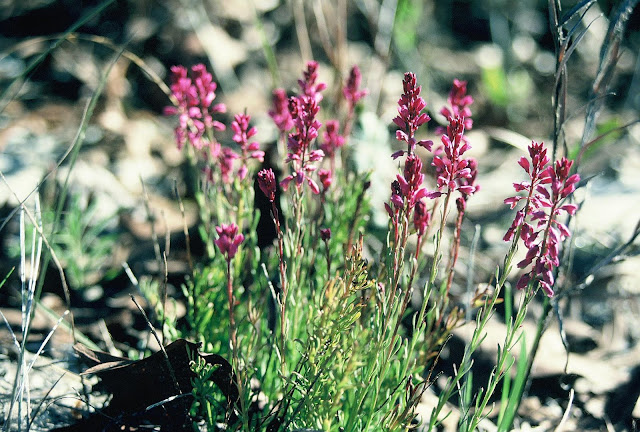 Most milkworts in Florida (i.e. polygalas) are associated with wetlands or the moist pockets of open uplands.  Lewton's polygala (Polygala lewtonii) is a beautiful, but very rare exception.  It is endemic and found only within the central portion of the peninsula that includes the Lake Wales Ridge and adjacent uplands, such as Ocala National Forest.  In its 6-county distribution, it is found in scrub and sandhill communities, and always in sunny locations with deep well-drained sands.

Lewton's polygala produces multiple branches from its central base.  Each stands less than 12 inches tall and is rather densely covered by linear succulent foliage that is alternate in clusters going up the stem.  As such, it is another "exception"; a scrub plant that is verdant.

Blooming occurs in late winter and spring.  Multiple flower stalks are produced at the ends of each stem and they bloom profusely for several weeks.  The flowers are somewhat tubular in shape, with a noticeable keel (wing) formed by the fused petals.  Each is a deep rosy pink in color.  A patch of blooming Lewton's polygala is striking and easy to find among its neighboring plants.

Lewton's polygala is listed by both the state and federal government as an endangered species.  Luckily, a good share of its known population is protected within Ocala National Forest so it is not under the same level of threat as many of our other scrub endemics.  It has never been offered commercially by any nursery, to the best of my knowledge, and I have never attempted to grow it myself.  I suspect it would require nearly perfect drainage and high sunlight to prosper in any landscape - natural or not.

Lewton's polygala is one of Florida's many unique treasures and that simply seems enough.

Posted by Hawthorn Hill at 7:04 AM