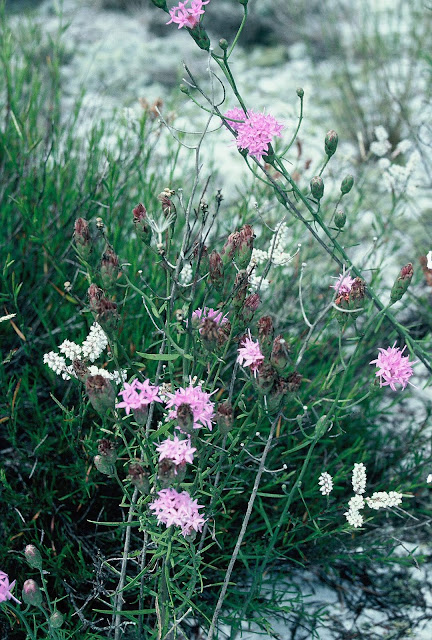 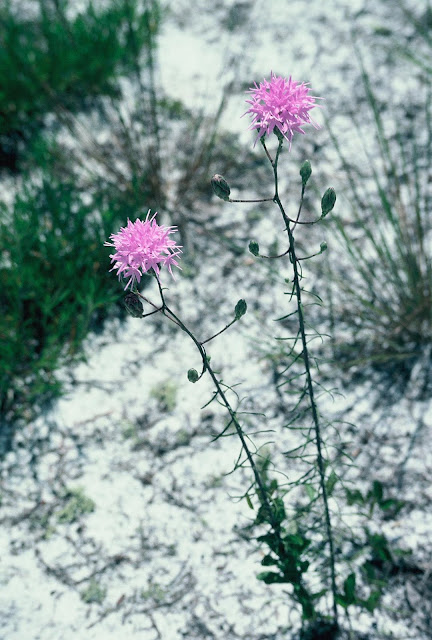 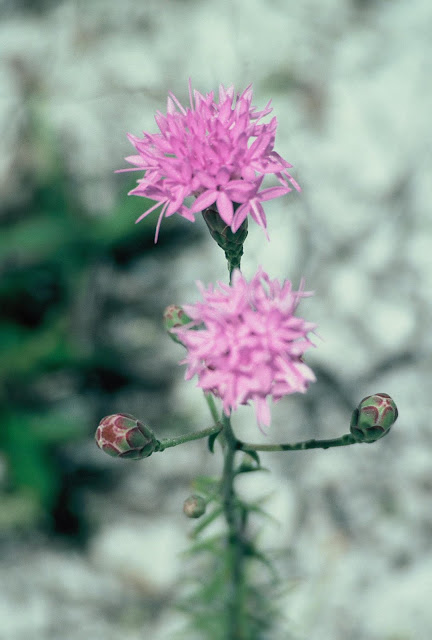 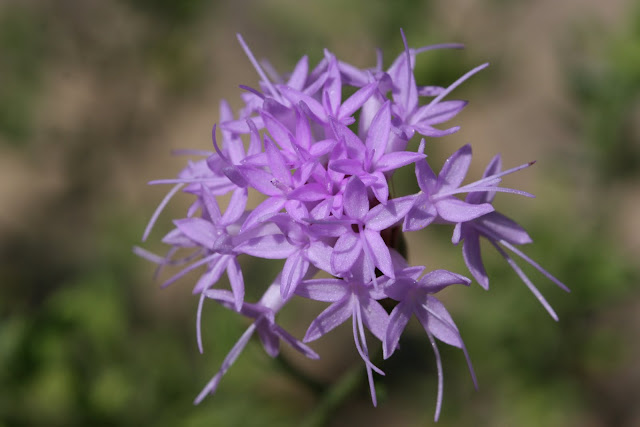 Florida blazing star (Liatris ohlingerae) is one of 5 endemic blazing stars in our flora (counting Garber's blazing star, L. garberi, which also occurs in Bermuda).  It is an extremely rare species; listed by both the federal and state government as an endangered species.  Florida blazing star occurs only within the Lake Wales Ridge scrubs of Polk and Highland counties and is not found universally in all of these areas either.  Thankfully, populations are protected within preserved lands such as the Lakes Wales Ridge National Wildlife Refuge system.
Like many scrub species, Florida blazing star does not invest alot of its energy in lush foliage.  It produces few basal leaves and the leaves which develop up the flowering stalk are rather short and needle-like.  It also produces few side branches.
There is also an economy to its flowering.  While many blazing stars produce large numbers of flowers along a significant portion of the flowering stalk, Florida blazing star produces few heads and those are generally confined to the very top of the stalk.  But, those heads are enormous (for a blazing star) and each flower is quite large and showy.  The result is a flower head that may exceed 1 inch in width, loaded with deep rich lavender blooms.  This is a definite head turner while in bloom in September to October, but a bit scrawny looking when it is not.  The flowers are magnets for butterflies and many other pollinators as well.
Despite its extreme rarity in nature, Florida blazing star is sometimes available from nurseries affiliated with the Association of Florida Native Nurseries (AFNN).  Like most Lake Wales Ridge endemics, however, it requires the perfect drainage provided by coarse-grained sands and high light levels to prosper.  Do not attempt this plant in a typical Florida landscape.  We have grown this species successfully for a good number of years at Hawthorn Hill within our created scrub garden area.  If you can give this beautiful blazing star the conditions it needs, it makes a wonderful addition to the landscape.  Because it rarely stands taller than 12-18 inches, it should be used in the front portion of the planting area so it can be more easily seen and admired.
Posted by Hawthorn Hill at 7:28 AM