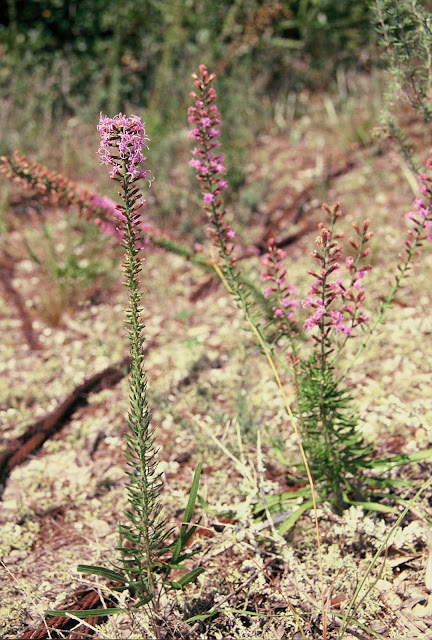 Another very rare endemic Florida blazing star is Godfrey's blazing star (Liatris provincialis). Godfrey's blazing star is confined to the coastal scrubs and sandhills of Wakulla and Franklin Counties and is listed as a state endangered species.
In many respects, Godfrey's blazing star is similar to the common Chapman's blazing star.  Both have leaves that become gradually smaller from the base and up the flowering stalk; not sharply smaller.  The flower heads are attached to the main stem by short stalks (they are not attached directly) and the flower heads are similar in size, though Godfrey's tends to be a bit smaller than Chapman's.  One of the easiest features in keying them apart is that in Godfrey's blazing star, the flower buds spread outward from the main stem and this makes the bud stem (the peduncle) visible and obvious.  In Chapman's blazing star, the buds are held tightly against the main stem , they overlap each other, and the peduncle is not easily seen.
Godfrey's blazing star eventually reaches about 3 feet in height and flowering occurs in late summer to early fall.  The flowers are the typical rich lavender of most members of this genus and plants in bloom are quite striking.  Of course, they attract a wide variety of butterflies and other pollinators - as do all members of this genus.
Godfrey's blazing star requires the perfect drainage provided by the coarse-grained sands of Florida's scrub and sandhill habitats.  It also requires high levels of sunlight.  Given these conditions, it is not difficult to grow or propagate.  To the best of my knowledge, however, this rare species has never been offered by anyone in the commercial trade.  We have grown it in the past in our landscape at Hawthorn Hill and currently have a new crop of seedlings from the seed we have collected.  Inquire if you are interested in giving this species a try in your landscape.  Because of its height, I find it looks best if planted in small clusters near the middle portion of a mixed wildflower planting - just attempt it only in deep well-drained sands in an area which receives ample sunlight. 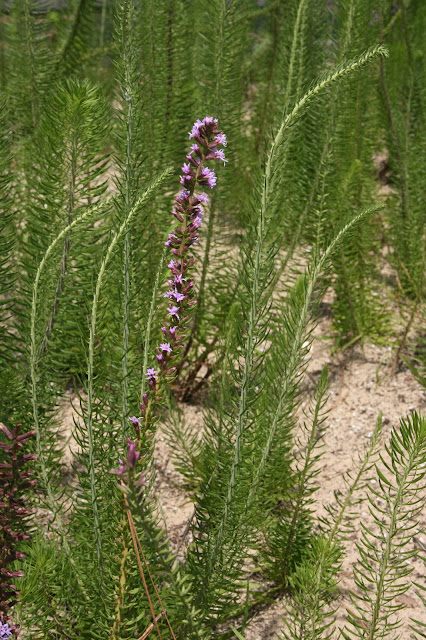 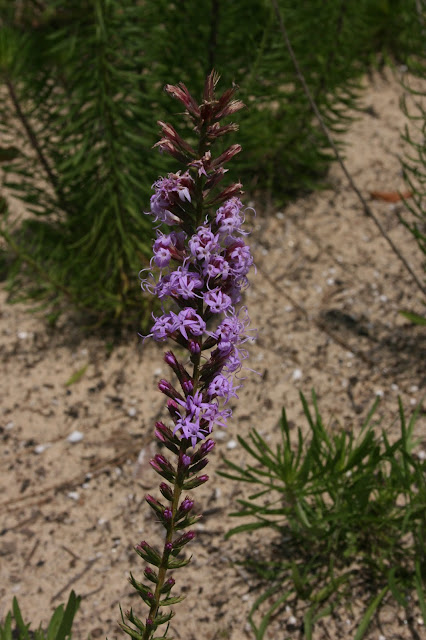 Posted by Hawthorn Hill at 7:52 AM