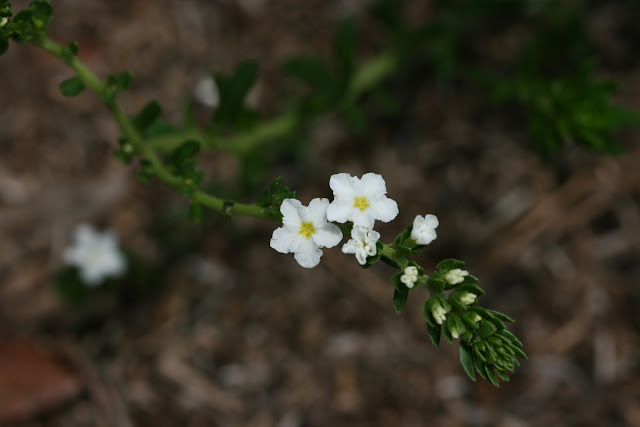 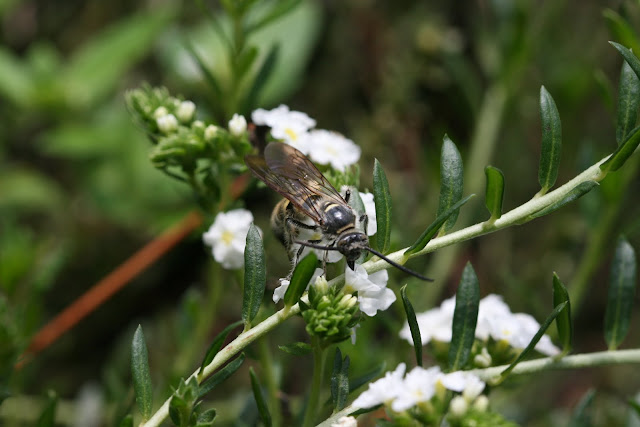 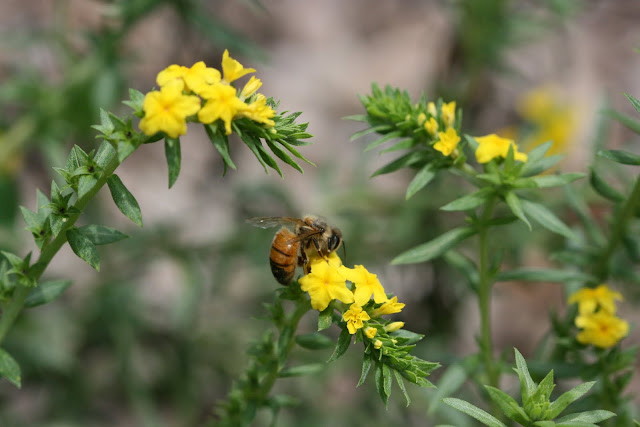 Pineland heliotrope (Heliotropium polyphyllum) is a plant of wetland edges, but exceedlingly adaptable to a wide range of growing sites in cultivated landscapes.  This plant is a member of a large family known for its attractive flowers and value in the butterfly garden.  In Florida, pineland heliotrope is found statewide, but it is an endemic; found nowhere else outside our state lines.

Taxonomists have lumped both forms as one species, though the two are quite different in many characteristics.  The white-flowered form tends to grow as a creeping groundcover; never standing much taller than 12 inches while the yellow-flowered form is more upright and can reach several feet if left unpruned.  I have never seen both forms in nature growing side by side and I sometimes question whether they should actually be considered as two spearate species. Both forms have deep green glossy needle-like foliage that is alternate along the numerous stems and they eventually make a dense planting that shades out their neighbors.

Pineland heliotrope occurs in nature mostly in moist to wet pinelands as well as coastal settings near mangrove swamps.  It is only rarely observed in drier locations, but it prospers in quite dry settings in the home landscape.  Its tolerance to nearly every growing condition, makes it an ideal wildflower for cultivation and it is widely available in the trade.  Pineland heliotrope, however, is sensitive to cold temperatures and will turn black at first evidence of frost or below-freezing temperatures.  It quickly re-establishes itself once warmer weather returns from its extremely deep taproots and a full pruning of the dead foliage transforms it once more to an attractive landscape addition.

Both color forms have flowers of identical size and shape.  These occur throughout the year (until cold weather appears, if ever) on the ends of the many stems in a sort of coiled panicle.  The small tubular flowers are very attractive to a wide assortment of pollinating insects, including butterflies.

Use pineland heliotrope as a groundcover or as an edge plant near walkways.  In Florida locations where frost and freezing temperatures are common, be prepared to have it looked burned during the colder months of winter, but don't prune the dead foliage back until the danger of frost is passed.  Because this plant is constantly trying to expand outward, it needs to be contained by regular pruning to the area of the landscape where it is desired.  Pineland heliotrope may spread by seed, but it more likely will spread by having its stems root along the ground.  Once well rooted, these are difficult to pull up and oftentimes the portion of stems left in the ground will resprout.

Using this plant in the home landscape is always a balance between its many very attractive traits and drought tolerance and its tendency to spread where it may not be welcome.  We use it in areas of our landscape and love it there.  We just keep our pruning shears nearby.

Posted by Hawthorn Hill at 7:38 AM