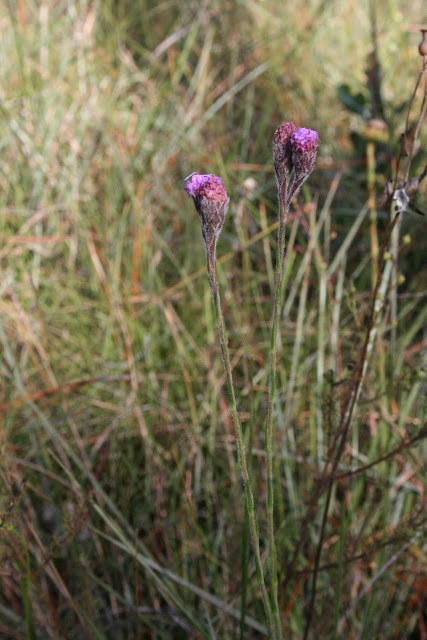 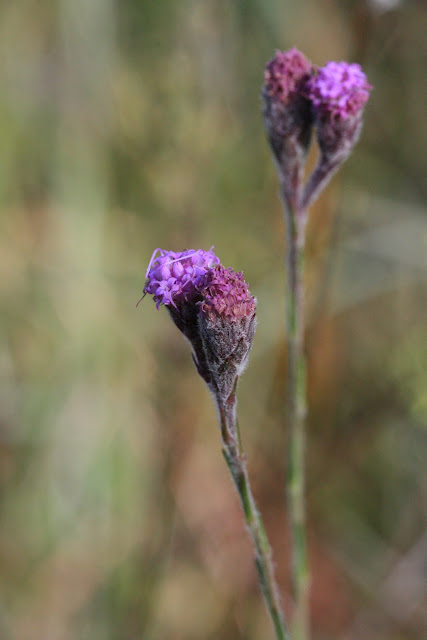 While the common name for this plant leaves a lot to be desired, the Latin one is dead on.  This is the member of the Carphephorus genus that looks the most like a blazing star (i.e. the genus Liatris).  As a long-time admirer of the Carphephorus, I was eager to finally meet this less-than-showy member.  Alexa and I finally got our chance (with Gil Nelson as our guide) in the Apalachicola National Forest, October 2009.  As it was towards the end of the normal blooming season (August-October), we found far more seed heads than open flowers, but the photos above pretty well capture it for what it is.
Bristleleaf chaffhead is a plant of the seasonally wet pine savannahs of north Florida and parts of the Southeastern Coastal Plain.  Like its close relative, C. carnosus (which I have written about previously), it is not especially drought tolerant and requires this additional soil moisture to thrive.
Its basal leaves are long and linear.  From this, it produces a flower stalk that eventually reaches 2-3 feet in height.  Mature plants may make several flower stalks and they arise next to each other in a rather tight pattern.
Each stalk produces just a few buds.  The flower heads contain about a dozen deep lavender flowers and these are small and tightly compressed together.  This arrangement is not especially showy, but the effect is quite interesting in a mixed wildflower setting.  Like other members of the genus, the flowers are pollinated by butterflies and bees.
Bristleleaf chaffhead has never been offered commercially by retail native plant nurseries in Florida and is unlikely to be anytime in the near future.  We have collected a few seeds during our past trip and hope to experiment with it in future years.  If this plant interests you, please let us know and we'll keep you apprised of our findings.

Posted by Hawthorn Hill at 9:18 AM