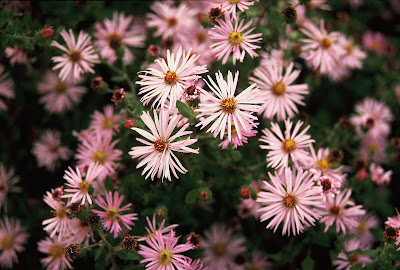 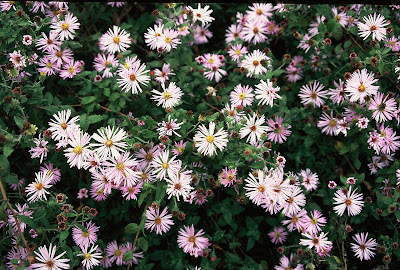 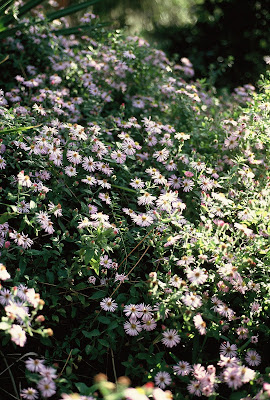 Climbing aster (Symphyotrichum carolinianum) is another wetland aster common to much of Florida except the far western Panhandle.  It is also resident to much of eastern North America.  This is a plant common to freshwater marshes and the banks of rivers and streams.  As its name implies, it also is a "climber" and it tends to ramble throughout neighboring vegetation and into the sunlight.  Climbing aster is not equipped with tendrils or other clasping structures, but it is very good at weaving in and out of the branches of adjacent trees and shrubs as well as grasses and other herbaceous species. For this reason, it is best grown on a trellis or a fence if used in the home landscape.
Like the other asters, climbing aster is deciduous.  It makes its appearance in early spring and rapidly re-establishes its presence.  Mature specimens may extend their growth more than 20 feet from their woody base.  The foliage is rather dense and the oval-shaped leaves are large for an aster.
What makes this aster so attractive, however, is its flowers.  Few of our native plants can rival climbing aster for the sheer number of blooms and the incredible fragrance it produces.  Blooming occurs extremely late in the season - often well after nearly everything else is done and gone to seed.  In Pinellas, this means late November and December.    At this time, you can get a whiff of its perfume well before you see it if you come anywhere nearby.  And, this aroma brings in pollinators such as butterflies and bees in huge numbers.
Although climbing aster is a wetland plant and can handle saturated soils for months at a time, it is also relatively adaptable to regular landscape situations.  Give it a bit of extra moisture during periods of extreme drought, and it is likely to prosper in nearly every typical landscape setting.
Climbing aster is the most widely grown aster by commercial sources and is usually easy to locate.  If you have a fence or a large trellis, you may wish to consider adding it to your landscape.  Just give it a bit of room and don't try to crowd it in with smaller, more diminutive species or it may overwhelm them.