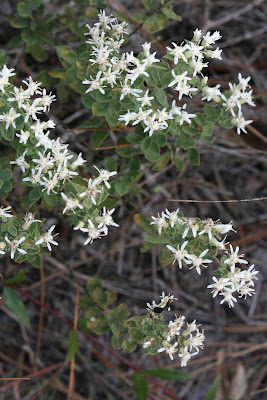 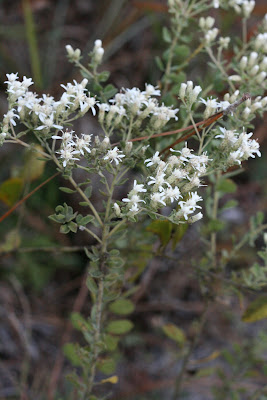 Whitetop aster (Sericocarpus tortifolius) is also called "Dixie aster" and is another one of the many asters formally described under the genus Aster, but moved due to the relatively recent taxonomic shake up of this once large and diverse genus.  There are now two species in Florida under the Sericocarpus epithet, but whitetop aster is by far the most widely distributed.  This species occurs statewide in a variety of upland situations and is fairly common.
Like other Florida asters, whitetop aster is deciduous in late winter and makes its return appearance each spring.  For much of the year, it is fairly non-descript and largely goes unnoticed.  Its erect "woody" stems eventually reach 2-3 feet in height by fall and blooming occurs from August through October.
Whitetop aster has very distinctive leaves that are unlike most of our other species formerly in the Aster genus.  They are round and rather thick, and seem a bit "wooly".  This gives mature plants a rather distinctive appearance as a foliage plant and makes it a useful addition to a mixed wildflower garden even before it blooms.
Whitetop aster, as its name implies, has a great many white flowers that cloak the tips of its branches in the fall months.  Individual flowers have fewer ray petals than most other asters, but they are a bright white in color and quite attractive.  And, like other asters, the blooms are also attractive to butterflies and other pollinators.
I am not aware of any commercial sources for this plant at this time in Florida, though it is easy to propagate from legally collected seed.  At present, we do not have plans to propagate it ourselves at Hawthorn Hill, but we'd be happy to change that should anyone desire to add it to their landscape.  Whitetop aster would make an easy low-maintenance addition to any mixed wildflower planting in a well-drained soil setting and its a shame that no market currently exists.