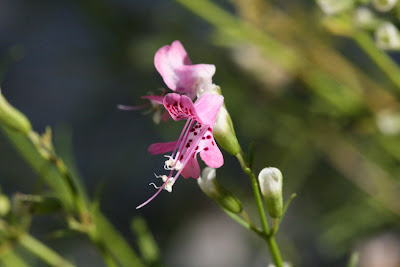 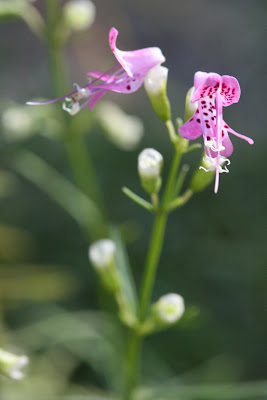 Longspur balm, or Robin's mint, (Dicerandra cornutissima) is one of six woody Dicerandras native to Florida. Each is unique and a relict species from the last time Florida was largely underwater and the peninsula was reduced to a series of sandy islands. At that time, those islands were isolated from each other and the Dicerandras evolved into unique species. Longspur balm evolved in the yellow sand scrubs just south of Ocala - an area sometimes referred to as the Marion Scrub. Because of its extremely limited range and small numbers, longspur balm is listed as Endangered by both the state and federal governments.
Longspur balm is named for the extremely long spurs at the end of the anthers - the male part of the flower that makes the pollen. Like all members of this genus, the leaves are very strongly aromatic. Longspur balm has a very pleasant minty fragrance when the leaves are brushed or bruised. Mature plants are rarely taller than 18 inches and most are far wider than they are tall - sometimes becoming several feet across.
Its the flowers that make the Dicerandras really special as wildflowers, however. All species bloom in the fall and longspur balm is no exception. The blooms of this species are usually a deep pink and vividly spotted by reddish purple dots. Flowering can last for more than a month and mature specimens may have many dozens of flowers at any one time.
Dicerandras are bee pollinated, for the most part, and the small papery seed capsules ripen by early winter. Although all of the woody species are considered to be "perennials", I have never found one to live past its third year. From my experience, seedlings do not bloom in their first fall, sporadic flowering occurs in the second and third-year plants do an "all and bust" strategy before dying. I have grown every species at one time or another and all of them have done this.
For this reason, longspur balm and its close relatives are difficult to maintain in a home wildflower garden - even if you create a yellow sand scrub by removing your topsoil and replacing it with true yellow scrub sand. All of the species will cross with each other if grown anywhere near each other so keeping it going by seed can only be done if you keep each species isolated from the others - or if you continually propagate it from stem cuttings.
As longspurred balm (and its other woody relatives) are state and federally listed Endangered species it is not a species that can be collected without a permit - and currently no one registered by the Association of Florida Native Nurseries is propagating it. This could change. If it does, these are all beautiful species for a home wildflower garden if and only if you can give it the pure sands and high light conditions it requires.