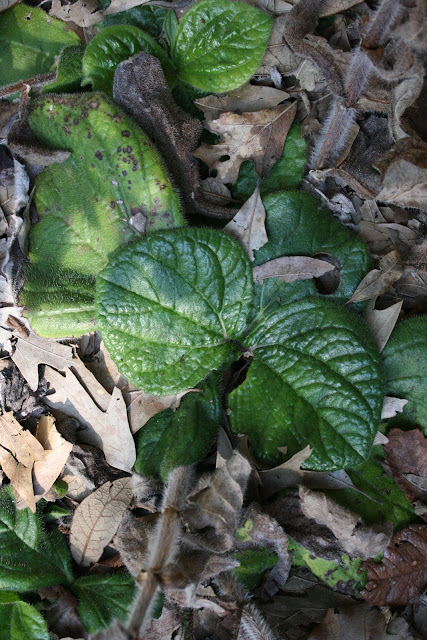 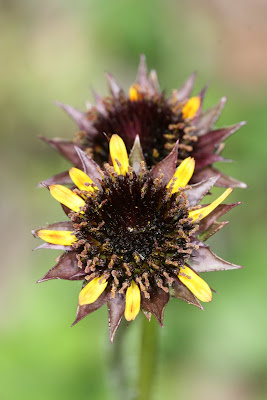 Rayless sunflower (Helianthus radula) is unique among Florida's many sunflower species.  Its Latin name "radula" is derived from its rough "raspy" basal leaves while its common name is pretty self-explanatory.  In most specimens, the beautiful yellow ray flowers so characteristic of this genus are absent.  In a few, like the photograph above shows, a few tiny ray flowers are actually present - mocking in a way the "sunflower" relationship it has to its relatives.  What is left are the dull-brown disc flowers.  While these may not be especially attractive to us, watch one for any length of time and you will find that they are attractive to butterflies and other pollinators.  To them, nectar is much more attractive than physical beauty.
Rayless sunflower is found almost statewide in Florida and occurs in a wide diversity of habitat types; from well-drained sandy uplands to seasonally wet pine flatwoods and savannahs.  The common denominator seems to be its need for openness and ample sunlight.  Rayless sunflower is also resident to our neighboring states of the Deep South.
Like most other members of the genus, it is a deciduous perennial.  Its basal leaves are unlike any other sunflower, however.  They are rounded, thick and rough, and held tightly against the ground surface.  As this plant also suckers, these leaves eventually form thick colonies that prevent most others from gaining a foothold next to them.
Flowering occurs in the summer.  The single flower buds are held upright on 1-2 foot tall stalks while the small disc flowers open up over a period of several weeks.
Rayless sunflower is almost always offered by a few of the native nurseries in Florida.  Its adaptability and ability to draw butterflies make up for its lack of aesthetics and gives reason for including it in a mixed wildflower planting.  We have incorporated it into our own landscape for a number of years at Hawthorn Hill and admire it for its "strangeness" and its wildlife value.  Use rayless sunflower in open sunny locations and place it near the front of the planting area where its foliage can be admired.  Mix it with other showier species for color and see which blooms the butterflies visit when they arrive.  You might just be surprised.