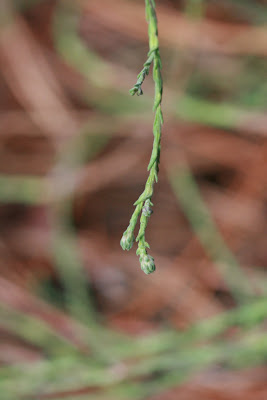 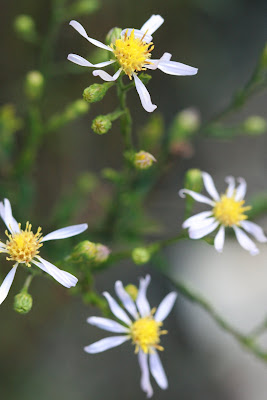 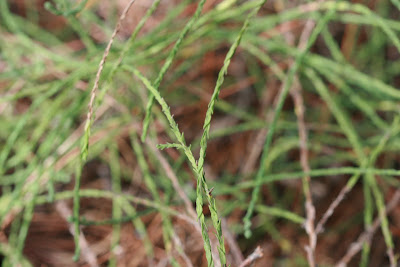 It is very obvious where scaleleaf aster (Symphyotrichum adnatus) gets its name.  Its tiny scale-like leaves are appressed (i.e. adnate) to the many wiry stems and unless you look closely you may even miss the fact that it has leaves at all.
Scaleleaf aster occurs throughout most of Florida and is found in our neighboring Southeastern states as well.  Although it is extremely drought tolerant, I find it most commonly in flatwoods instead of sandhills and it is tolerant of seasonally inundated areas for short periods of time.
Vegetatively, this is a very unique plant and you are likely to either love it for its "strangeness" or shy away from it for the same reason.  It emerges in early spring from its winter dormancy and quickly produces many wand-like stems.  Older plants may produce several dozen stems from the woody base and each stem extends outward for 2-3 feet; although individual plants rarely stand taller than 2 feet.  For this reason, it is best to give individuals a bit of space between their neighbors.
Scaleleaf aster produces beautiful flowers despite its vegetative "uniqueness".  This is a late blooming aster and often doesn't begin until November.  Ours bloom well into December and provide some of the only color (and nectar for insect pollinators) during that part of the season.  Although individual flowers are no larger than 1 inch across, mature plants can have nearly a hundred blooms at the peak of the season.  And, such a show is impressive.
Although my current photos show the ray flowers to be almost white, its color ranges to rich lavender.  Currently, this plant is available through Pine Lily Nursery in Ona, Florida and we can only hope that its popularity increases and that other nurseries will add it to their lists as well.  Scaleleaf aster is easy to grow, is very forgiving of growing conditions, and makes an excellent addition to a mixed wildflower planting.  We have kept it in our Pinellas County landscape for several years and have found it to be well behaved as well.  Specimens seem to grow larger with age, but do not noticeably sucker and spread..