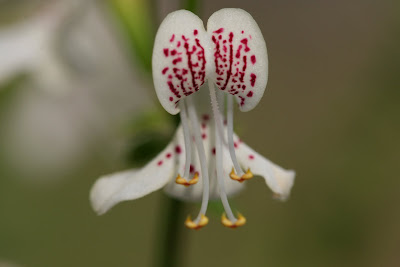 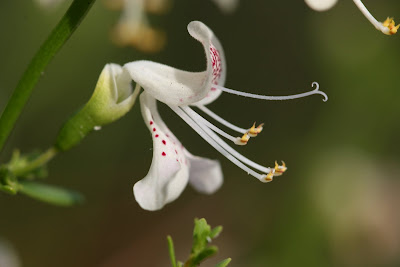 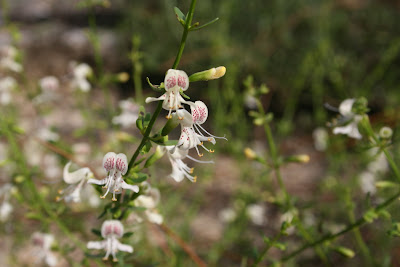 Christman's balm (Dicerandra christmanii), or Garrett's mint, is a truly fascinating story and a wonderful member of this amazing genus. Discovered and collected by Ray Garrett in 1948, it was never formally described as a new species and its type location was very poorly described. After that, it was "lost" for decades. It took one of Florida's best field naturalists, Steve Christman, to finally rediscover it in 1989 and it was described then as a unique species.
Christman's balm is extremely rare and is found in a very small area of yellow-sand scrub near the town of Sebring. It is listed as an Endangered species by both the federal and state and the bulk of its population has now been protected as part of the Lake Wales Ridge National Wildlife Refuge.
On the surface, this species looks similar to another rare relative, scrub balm (D. frutescens) except that in Christman's balm the tips of the anthers are yellow instead of purple. What really separates this species apart from scrub balm - and all of the other species - is the fragrance of the leaves. While the other species are decidedly "minty", Christman's mint emits a fragrance reminiscent of Vick's Vaporub. The scent is quite striking.
Christman's balm blooms in October through early November. Individual plants rarely stand more than 12 inches tall and may be nearly 24 inches across. Its flowers are normally more cream-colored than white and the spotting on the petals is normally bright red.
This is a wonderful and unique species that helps make Florida such a botanical treasure trove.
It is never likely, however, to be offered commercially.
Posted by Hawthorn Hill at 12:58 PM