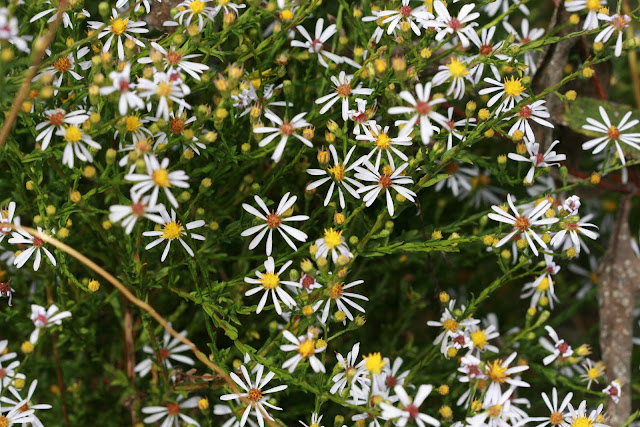 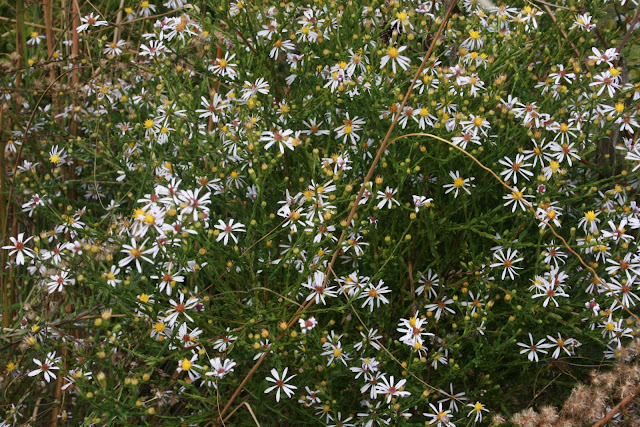 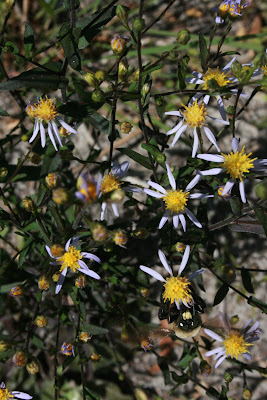 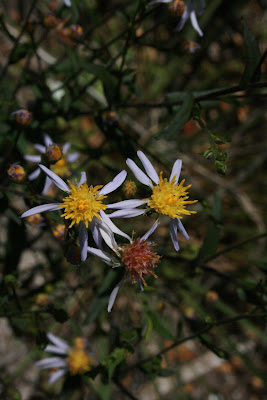 One of my other favorite asters is Walter's aster (Symphyotrichum walteri).  I spotted this wonderful aster for the first time in a favorite sandhill area north of my home and its presence commanded my attention.  Standing several feet tall and being rather rounded in appearance, its crown was covered in a mantle of tiny light lavender flowers.  I found a few ripe seeds that day and have been growing it since in our landscape.
Walter's aster occurs sporadically in northeastern and central Florida, and also is found in a few states north of us along the Eastern Seaboard.  It occurs in a variety of sunny well-drained habitats, including sandhills and xeric flatwoods.  In the landscape, it is forgiving of a wide variety of growing conditions and not at all demanding.
In a way, Walter's aster looks a bit like scaleleaf aster, except that the plants are more erect and the small leaves recurve away from the stems - not clasping tightly to it.  The blooms are similar too; fairly small, but extremely numerous and colorful.  Ours bloom in November and often into early December.
In our landscape, Walter aster has been very well behaved.  Each year, we get a few new plants from seeds left unharvested and a few suckers.  Suckering has been minimal, however, and has been welcome as we are trying to get more plants established into that area.  We have it planted near the back of our planting beds so that it provides a beautiful screen in late fall when it is blooming and is not noticeable at other times.
Walter aster has largely been ignored by native plant growers and I am not aware of it ever being propagated commercially.  Yet, it is a wonderful addition for anyone seeking asters for the landscape and for butterfly and wildlife gardeners looking to extend the nectar season.  We are not currently propagating it at Hawthorn Hill, but could easily do so if a demand arose.

Posted by Hawthorn Hill at 7:41 PM