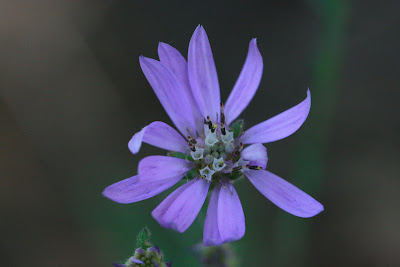 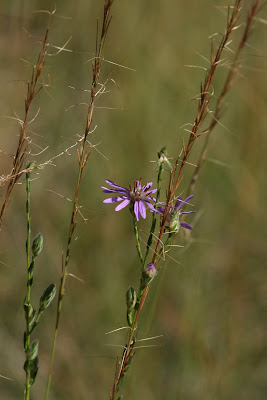 Eastern silver aster (Symphyotrichum concolor) is easily one of my very favorite "asters" and certainly one of the showiest.  This wonderful species occurs statewide in well-drained sunny habitats and is quite adaptable to growing conditions as long as the soils do not hold water for extended periods.  It also is distributed throughout much of the eastern U.S and extends its range north all the way to New York state.
In Florida, eastern silver aster is deciduous.  Its silvery pointed leaves emerge in early spring and its stem begins to elongate almost immediately.  Depending on soil and moisture, this species may stay 3 feet tall or it may produce long wand-like stems that reach out more than 6 feet from its base in the ground.  Richer soils seem to promote longer stems.  These stems are too heavy to remain erect and they often stand only 2-3 feet tall.
Eastern silver aster blooms in the fall, but bloom times vary somewhat more than for other species in this genus.  Specimens may even sometimes bloom a bit in the spring.  I have seen eastern silver aster in full bloom in September, but ours in our Pinellas County landscape tend to flower much later - usually in November.  The flowers are produced at the ends of the stems and are spectacular.  Few flowers come close to the cornflower blue of eastern silver aster and each bloom is up to 2 inches across. The flowers of eastern silver aster are especially attractive to pollinating insects.
This species is only sporadically offered by Florida native plant nurseries - which is regretable.  We have grown it at Hawthorn Hill for a good number of years now and have found it to be very easy to maintain in the landscape.  Like many asters, eastern silver aster spreads by suckering, but it is not aggressive in this habitat and we have never had to control it like we do with a few other species.  Plant it near the back of an open sunny wildflower planting and mix it with larger native grasses, such as lop-sided Indiangrass (Sorghastrum secundum), to help support its stems at blooming time.
We do not currently propagate this species for sale at Hawthorn Hill, but we would be happy to add it should demand for it occur.  We can think of no more-beautiful aster and we would love to pass it on to more of you. 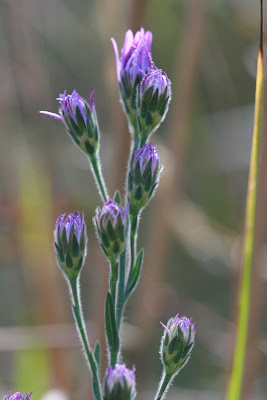 Posted by Hawthorn Hill at 6:47 PM