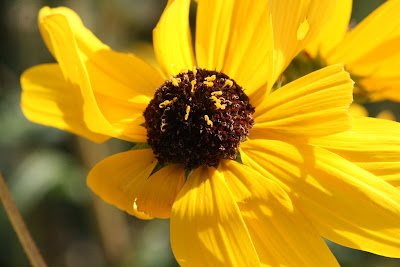 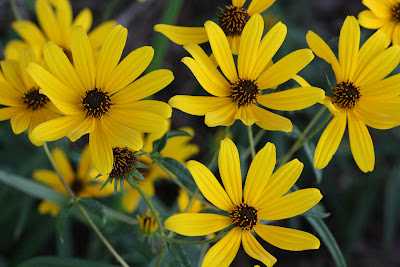 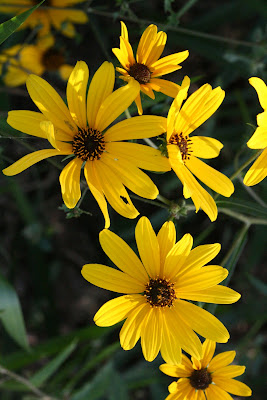 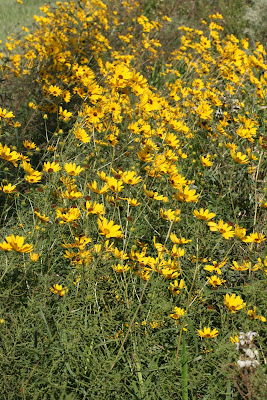 Narrowleaf sunflower (Helianthus angustifolius) is one of the most common sunflowers in Florida. It is found statewide, except for extreme south Florida, and occurs throughout much of the eastern half of the United States besides.  This is a wetland species, and it is most common in sunny locations with saturated soils; marshes, roadside ditches, and open savannahs.
As its name implies, this species has noticeably narrow leaves.  These are mostly alternate on the stems, up to 8 inches long, and rather rough to the touch.  Narrowleaf sunflower is deciduous, but grows rapidly in the spring.  By late summer, individuals may be as tall as 6 feet and are often 4-5 feet.  They also sucker aggressively and tend to form dense colonies in the sites where they occur.  Because of their size, these colonies are often virtual monocultures with little else finding a niche to fit into.
Narrowleaf sunflowers are spectacular when they are in bloom.  They are a fall-flowering species and the peak bloom times are October-November, though limited flowering can occur just prior to this and just after.  Individual flowers are often 3 inches across and the ray flowers are an exceptionally bright yellow in color.  The disc flowers, however, are dark.
Narrowleaf sunflower is widely grown commercially and is fairly easy to maintain in the home landscape - as long as its moisture requirements are met.  Although it is a wetland sunflower, it can persist in many upland settings if it receives adequate rainfall during the heat of summer.  If not, it will quickly disappear.  As described for the paleleaf woodland sunflower previously, do not use this plant in small settings or in formal wildflower beds.  It is a wonderful addition to larger-scale settings and in more naturalized plantings.  It is also exceptional as a wildflower along the shoreline of a pond.