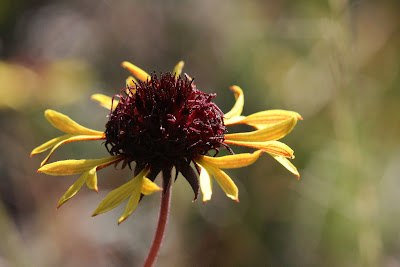 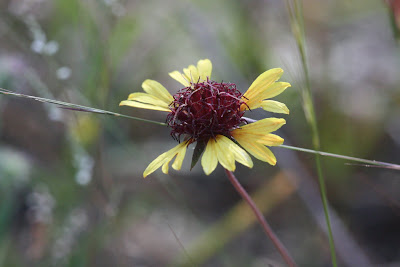 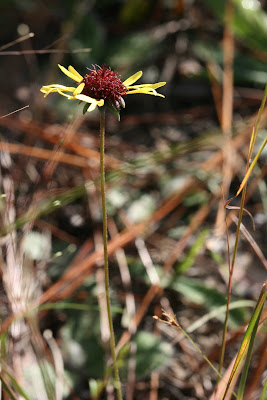 It would seem that most folks that grow wildflowers in Florida have used blanketflower (Gaillardia pulchella) at one time or another and are quite familiar with it.  Few of these same people seem to know that it has a close cousin - lanceleaf blanketflower (Gaillardia aestivalis) - that has its own certain charm and beauty.  Lanceleaf blanketflower is found throughout the northern two-thirds of Florida in upland habitats such as sandhills and open xeric flatwoods.  Its range extends throughout much of the south and mid-south and west to Texas and Oklahoma.
Lanceleaf blanketflower is a deciduous short-lived perennial that rarely stands taller than 24 inches.  Unlike its more commonly grown cousin, it is an erect plant with a small rosette of basal leaves, few leaves going up the stem and a single bloom on top.  For much of the year, this rather diminutive plant remains hidden in the understory mix of other wildflowers and native grasses.  It only becomes noticeable at flowering time.
Lanceleaf blanketflower blooms during the summer and early fall; anytime from June through October.  The ray flowers are not as dense around the disc as its close relative and they are almost always a pale yellow with a tiny bit of darker orange near the base.  The disc flowers are a dull red.
Lanceleaf blanketflower attracts a variety of pollinators to its blooms and makes a wonderful addition to a mixed wildflower planting.  Because of its small size and non-aggressive growth habit, it can be added to nearly any setting with good drainage and sunlight.  It just is likely to get lost in the mix unless you plant several in closely spaced clusters and scatter these clusters near the front of the planting area.
This is yet another species which is not currently being propagated commercially in Florida, and we have not yet attempted to do so at Hawthorn Hill.  Please check back with us, however, if you are interested as we are very likely to add it to our gardens in the months ahead.

Posted by Hawthorn Hill at 6:32 AM