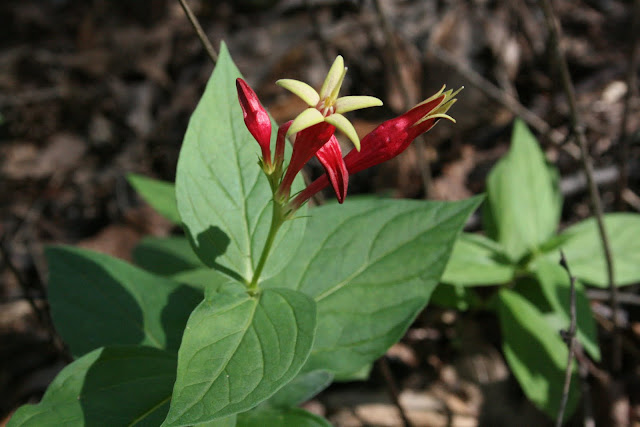 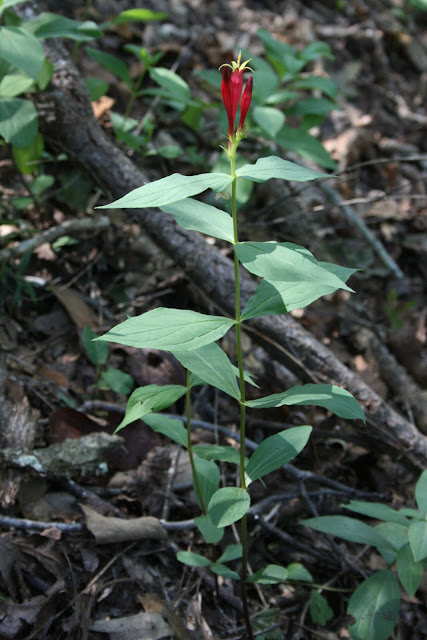 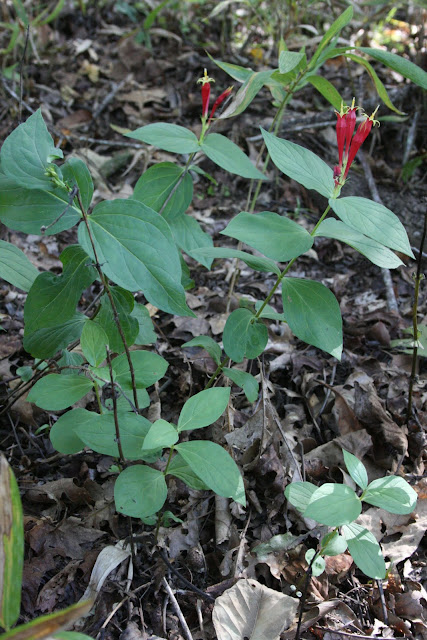 Indian pinks (Spigelia marilandica) are simply a stunning wildflower.  No more, perhaps, needs to be said.  In Florida, it is present in the understory of various deciduous hardwood forests in the central and western Panhandle.  Its range, however, extends north to southern Illinois and covers much of the south and mid-south, and west to Texas.  It is a member of the "strychnine" family and is poisonous to consume.  In small doses, however, it has been used medicinally to control intestinal worms, but not so in modern times.
Indian pink is a deciduous perennial.  It makes its appearance each year in the spring , producing multiple stems from its woody underground growing point.  The stems eventually reach a height of several feet and are rather thin with wide, oval, opposite leaves.
Blooming occurs mostly in the late spring as the overstory canopy starts to develop, but subsequent blooming can occur in summer and fall months too.  Its the brightly colored flowers that make this wildflower so wonderful.  Each tubular flower is nearly 2 inches long and a brilliant scarlet red.  The inside of the reflexed petals are bright yellow in contrast.  Individual plants produce blooms over several weeks, a few at a time.
Indian pink is pollinated by hummingbirds as well as a variety of insects.  In the garden, it does best in partial shade and in rich well-drained soils.  Do not plant it in deep shade or underneath hardwoods, such as live oaks (Quercus virginiana), that are not deciduous in the winter months.
Indian pink is regularly available commercially though none of the nurseries associated with the Association of Florida Native Nurseries currently list it.  We have maintained it for a number of years in our Pinellas County landscape, but have not quite found the secret to keeping it vigorous for extended years where we have planted it.  It may simply not be well adapted to our more-southern growing conditions where winter temperatures do not normally go below freezing.
If you have the right setting, this is one woodland wildflower that makes a spectacular spring show.  Make sure you purchase it from a reputable nursery that is propagating it and not from someone who is digging them from the wild.  If you are not sure, ask.