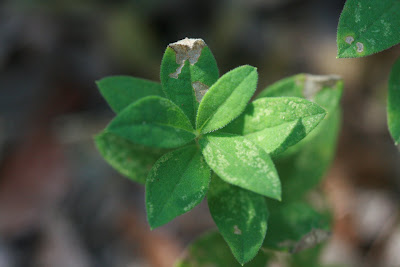 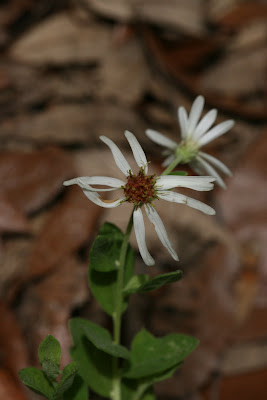 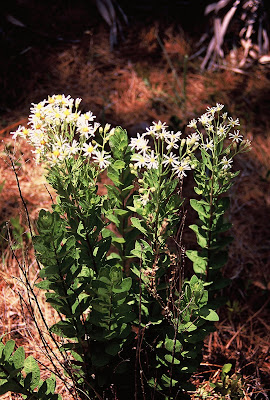 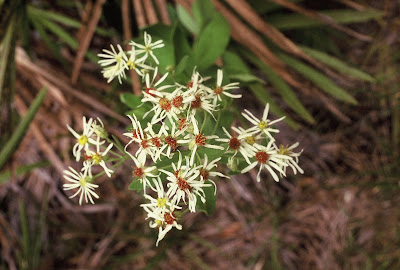 Pinebarren aster (Oclemena reticulata) is the other aster sometimes referred to as "whitetopped aster", but it is very different from Sericocarpus tortifolius.  Both species, however, have been recently removed from the genus that contains most of what was once the Aster genus (now Symphyotrichum) and put into a small and separate one.
Pinebarren aster is found nearly staewide in Florida and also occurs in states immediately adjacent to us.  As its name implies, it is most common to the understories of pine flatwoods habitats and very rarely in habitats that are more well-drained.  It seems to prefer those areas that are occasionally inundated during the summer rainy season, and I have not found it to be especially drought tolerant if planted in areas that lack that periodic extra moisture.
Pinebarren aster is a bit non-descript in comparison to many members of this group, but it has a certain charm about it nonetheless.  It emerges from its winter dormancy in early spring and grows quickly to its mature height of about 2 feet (sometimes to 3 feet in good growing conditions).  It is generally a robust, narrow-crowned plant and it produces many stems from the main woody growing point at ground level.  The leaves are oval and slightly toothed.  All of this makes for an aesthetically interesting plant for a mixed wildflower setting.
Pinebarren aster is unique for its early blooming season.  While nearly every other Florida "aster" tends to bloom in the fall and early winter, pinebarren aster blooms most commonly in the early summer.  Some flowers may appear later, but the real burst of blooms tends to occur near the start of the summer rainy season.  The flowers are not spectacular, being a dull white in color, but the tightly packed crowns make a wonderful contrast to its neighbors when used in a mixed planting.
Pinebarren aster suckers, but not aggressively.  Over time, it will fill in the open spaces around it, but it is unlikely to out-compete its neighbors.
Pinebarren aster is not currently being propagated by any of the nurseries listed within the Association of Florida Native Nurseries, but it is sometimes available nonetheless.  We have grown it for many years in our Pinellas County landscape at Hawthorn Hill and we hope to keep it for as long as we can garden.

Posted by Hawthorn Hill at 8:36 AM