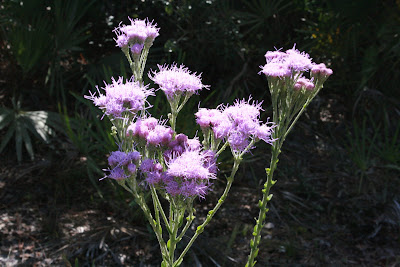 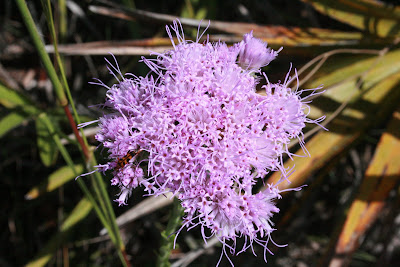 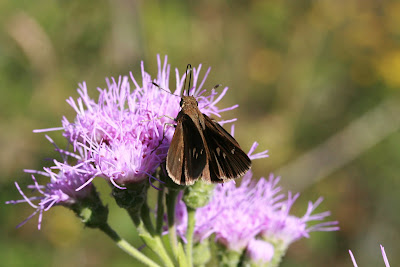 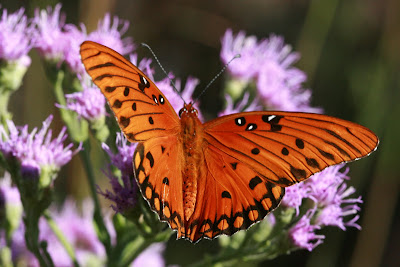 Florida paintbrush (Carphephorus corymbosus) is found throughout peninsular Florida and in Georgia and South Carolina.  Its Latin name comes from the shape of its flowerhead; a "corymb" being "flat" or "convex"-shaped.  The common name comes from the extremely large and colorful flowerheads that seem to paint the landscape during the fall months.
Florida paintbrush is hands down the showiest member of this wonderful genus and one of Florida's brightest wildflowers.  It occurs in well-drained sandy and sunny habitats and is the most drought tolerant member of this genus besides.  Like all the Carphephorus in Florida, Florida paintbrush is a deciduous perennial.  It dies back each winter after the seeds are dispersed and reappears in early spring.  For much of the ensuing months, it remains as a flat rosette of succulent basal leaves.  Then, in mid-summer, it begins growth on its flower stalk.
At maturity, Florida paintbrush stands 2-3 feet tall (sometimes up to 4-5 feet).  Flowering generally occurs a few weeks before most other members of this genus; usually from August-October depending on latitude.  Well-developed flowerheads may be 5-6 inches across and contain hundreds of strikingly bright lavender flowers.  Few wildflowers in Florida attract butterflies as well as Florida paintbrush.  If you want to know which butterflies are present in your area during their early fall blooming time, simply watch a patch of this plant for an hour or two.  There would be no reason to conduct any other kind of survey.
Thankfully, this is a species that is widely available from commercial sources and relatively easy to add to a wildflower planting.  Florida paintbrush is a long-lived perennial and very well-behaved in the landscape.  Mature specimens will add "pups" next to the main rosette, so over time individuals will slowly spread outward from the parent.  They also are likely to spread from seed if you do not "deadhead" the spent flowers and if you do not mulch the ground beneath them to cover the bare ground.
Though Florida paintbrush is very drought tolerant, it requires moisture at its taproot.  Plant it in well-drained soil so that rainfall soaks in deeply instead of running off the surface.  Give it plenty of sunshine also.  I like to plant it in small groupings instead of singly, and towards the middle of the planting bed.  It works very well mixed with blazing stars (Liatris spp.), goldenasters (Pityopsis spp. and Chrysopsis spp.), and other fall-blooming wildflowers.