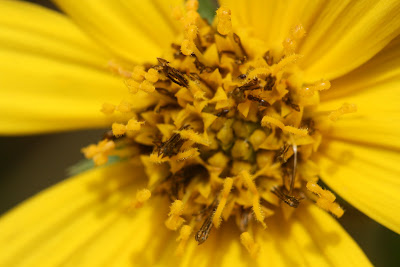 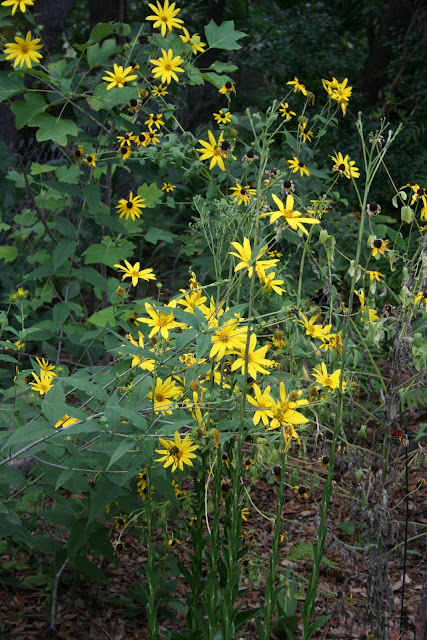 Paleleaf woodland sunflower (Helianthus strumosus) is a common species native only to the northern tiers of counties in Florida, but resident to much of the eastern half of North America.  As its name implies, it occurs most commonly at the edges of woodlands.  It is an upland sunflower, but in much of Florida it does best when given just a bit of extra moisture during the heat of summer.
Paleleaf woodland sunflower is a thin-stemmed tall perennial.  It dies back to the ground in the fall and re-emerges in the spring.  By early summer, it may stand as tall as 7 feet.  The leaves are somewhat glaucous which gives them a pale appearance.  They are also coarse and rough to the feel, somewhat arrow-shaped, and opposite on the stem (normally).
Paleleaf woodland sunflower blooms in mid-summer to very early fall (June-September) and has a protracted flowering season; individual plants are likely to be in bloom for more than a month.  The flowers are rather typical for most in this genus.  Each flower may be 2-3 inches in diameter, and both the ray petals and disc flowers are bright yellow.  These attract bees more than butterflies, but a wide variety of pollinators can be expected to visit them.
In the landscape, pale woodland sunflower is relatively easy to grow.  We have maintained ours (pictured above) in an opening in our backyard woodland.  Here, they get ample sunshine for part of the day and just enough moisture at their roots to keep them thirving.  I have killed my share in other locations that were just too harsh. Like many other members of this genus, it suckers aggressively and our 3-4 plants that we started with became nearly 100 by the end of the second year.  This has worked well for the location we have it planted in and these suckers have filled in an otherwise open area and provided some real habitat value.  But, we have to keep them back from some of the smaller wildflowers planted up front or they would have shaded them into oblivion.
Pull any suckers that you are displeased with and pot them up for others to enjoy.  They are easy to weed out and to replant elsewhere.  Paleleaf woodland sunflower is more drought tolerant than many of the other species commonly propagated in Florida.  It is normally fairly easy to find commercially and makes a great addition to the right location.  Do not attempt this in a wildflower setting that is meant to be somewhat formal looking; it does best where it can be naturalized and allowed to roam a bit to where it wants to be.  Do not use it either in a small landscape setting as its large size and tendency to wander will make it look out of place.