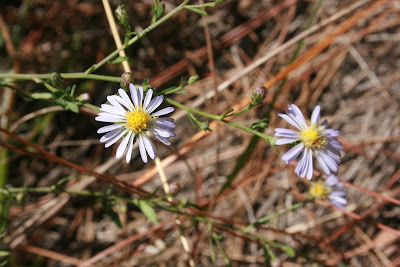 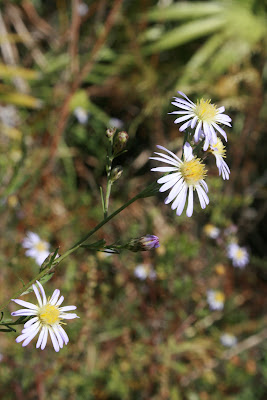 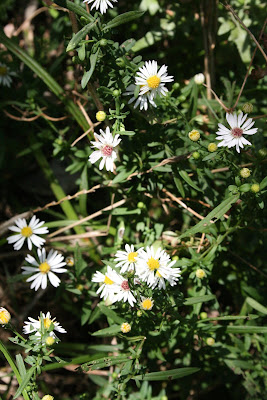 Rice button aster (Symphyotrichum dumosum) is the most widely distributed aster in Florida and is found throughout the eastern half of North America besides.  While some taxonomists sometimes separate out various "races" of this species, it is generally simply considered to be a variable species.
Rice button aster is quite adaptable to growing conditions and can be found growing in well-drained as well as moist soil habitats.  It is an aggressive suckering plant and will send its root suckers out a great many feet away from its central woody growing core.  For this reason, it is usually seen growing in colonies instead of as solitary individuals.
This widlflower also is variable in terms of its mature height.  Most specimens stay less than 3 feet tall, but in rich/moist situations it can grow taller.  It tends to occur as solitary stalks with multiple branches.  These have deeply green linear leaves.
Rice button aster blooms in the fall; any time from September until December.  The flowers are about 3/4 inches in diameter and can vary from white to lavender.  Because this plant tends to occur as scattered individual stems, the flowers are distributed throughout the landscape.  This reduces the "dramatic effect" impact, but creates a more-subtle one.
Because of its adaptability and ease of propagation, rice button aster is often available from commercial sources.  We have had it in our landscape for a great many years and appreciate its beauty, but we also pull a few suckers out each year when it attempts to head into areas where we'd prefer it not to be.  The suckering is more of a problem if this species is introduced to sites with better soil moisture and fertility than we have in our landscape.  Mix rice button aster with other medium-tall wildlfowers (such as Pityopsis graminifolia) in the middle of the planting area.  If it heads to the front, you may want to limit it.